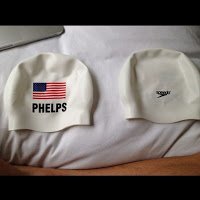 The Olympics is about athletic performance, drama and inspiration.

But it is always about rooting for your favorite athlete and your own country’s heroes and heroines.

Whether you are watching in a stadium, at home in front of your TV, at the office secretly online, or standing on a shoreline at the Olympic marathon swim, it is fun to see your countryman compete. It is a blast to cheer for your favorite swimmers and see the tears stream down their faces as your national anthem is played or wrap themselves up in your national flag.

Millions of people around the world take patriotic pride in seeing their fellow citizens beat the rest of the world.

From Aussie Aussie Aussie, Oi Oi Oi! to Go USA!, prayers, chants, and cheers are part of the Olympic experience from the fans’ perspective.

And that is one huge reason we agree wholeheartedly with Michael Phelps and his criticism that swimmers cannot have their country flag printed on their swim caps. On Twitter, the 16-time Olympic medalist complained about the new look of the American team swim caps. “Front and back of our caps. We used to be able to have front and back side with flags but for some reason there are rules that tell us we can’t do that anymore? Smh gotta love an organizing committee telling us we can’t do that anymore…”

It is wonderful to see the different open water athletes and pool swimmers parade into the venue and stand at the start with swim caps printed with their country’s flag.

The swim caps with flags are especially helpful in open water swimming where the athletes are swimming so close to one another. It is often too difficult to see their numbers written on their hands, shoulders and back – and impossible to know who is who in the race. If you know their country flag, it is a great way to identify your favorite swimmer among the splashing, thrashing pack.

Now we have lost that relatively easy ability to identify our favorite athletes and their competitive rivals. Now we may see a bunch of unmarked caps – unidentified blobs of white and black – swimming the 6 loops of the Olympic 10K Marathon Swim in the Serpentine.

So we think Mr. Phelps is right on and we respect his confidence in expressing his opinions.

Cornel Marculescu, the FINA Executive Director who lords over the governing body responsible for determining what swimmer can and cannot wear in international competitions, does not take criticism lightly, especially when done so in such a public manner.

But despite Marculescu‘s iron-clad rule over FINA, it is Mr. Phelps who has the global audience and attention in the build-up to the Olympics. It is refreshing to hear directly from the athletes instead of one-way administrative directives from FINA’s headquarters.