The Tangata-manu Competition On Easter Island 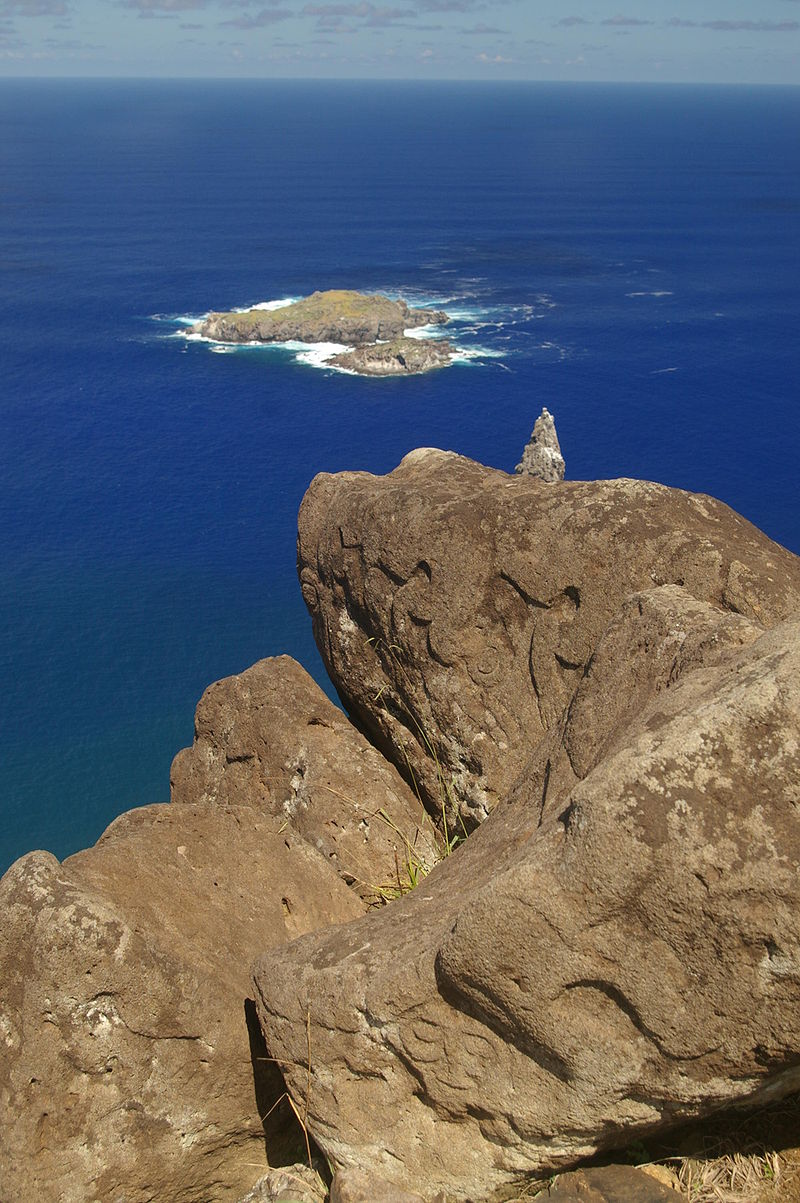 The tangata-manu – or birdman – was the winner of a traditional climb-swim-climb-swim-climb competition on Easter Island. The ritual was an annual competition to scale down a large cliff on Rapa Nui (or Easter Island), jump in the water, swim a kilometer out to the Motu Nui islet, collect the first bird egg of the season, strap it to your forehead, swim back to Rapa Nui, and then climb the steep sea cliff of Rano Kau to the clifftop village of Orongo.

The contestants were assisted by 1-2 men (i.e., hopu) who would actually be the individuals who swam to Motu Nui.

These hopu would attempt to return to the main island with the first egg while the contestants waited at Orongo. The race was dangerous and many hopu were killed by sharks, drowning, or falling down the cliff.

The hopu who did not collect the first egg conducted a tandem swim back to the main island while the winning hopu stayed on Motu Nui and would fast until he swam back. When he returned back to land, the hopu would give the egg to his patron (the actual contestant) who would be declared tangata-manu. The new tangata-manu was given food and other advantages including the entire harvest of wild bird eggs and fledglings from Motu Nui. They went into seclusion for a year in a special ceremonial house where he would spend his time eating and sleeping and would engage in no other activity.

The Birdman cult was suppressed by Christian missionaries in the 1868 as researched by Katherine Pease Routledge who wrote The mystery of Easter island; the story of an expedition, published in 1919.

She described the traditions of tangata-manu and hopu in her 1919 book, “Not many sea-birds frequent this part of the Pacific, but on Motu Nui some seven species find an abiding-place. Some stay for the whole year, some come for the winter, and yet others for the summer. Among the last is a kind known to the natives as manu-tara; it arrives in September, the spring of the southern hemisphere.

The great object of life in Easter was to be the first to obtain one of the newly laid eggs of this bird.

It was too solemn a matter for there to be any general scramble. Only those who belonged to the clan in the ascendancy for the time being could enter on the quest. Sometimes one group would keep it in their hands for years, or they might pass it on to a friendly clan. This selection gave rise, as might be expected, to burnings of hearts ; the matter might be, and probably often was, settled by war

The privilege of obtaining the first egg was a matter of competition between members of the Ao, but the right to be one of the competitors was secured only by supernatural means. An “ivi-atua,” a divinely gifted individual, of the kind who had the gift of prophecy, dreamed that a certain man was favoured by the gods, so that if he entered for the race he would be a winner, or, in technical parlance, become a bird-man, or tangata-manu.

The victor, on being successful, was ordered to take a new name, which formed part of the revelation, and this bird-name was given to the year in which victory was achieved, thus forming an easily remembered system of chronology. The nomination might be taken up at once or not for many years; if not used by the original nominee, it might descend to his son or grandson. If a man did not win, he might try again, or say that theivi-atua was a liar, and retire from the contest.

Women were never nominated, but the ivi-atua might be male or female, and, needless to say, was rewarded with presents of food.

The actual competitors were men of importance, and spent their time with the remainder of the Ao in the stone houses of the village of Orongo; they selected servants to represent them and await the coming of the birds in less comfortable quarters in the islet below. These men, who were known as hopu, went to the islet when the Ao went up to Orongo, or possibly rather later.

Each made up his provisions into a pora, or securely bound bundle of reeds; he then swam on the top of the packet, holding it with one arm and propelling himself with the remaining arm and both legs.

The defeated hopu started at once to swim from the island to the shore, while the winner, who was obliged to fast while the egg was in his possession, put it in a little basket, and, going down to the landing-rock, dipped it into the sea. One meaning of the word hopu is wash. He then tied the basket round his forehead and was able to swim quickly, as the gods were with him.

At this stage sometimes accidents occurred, for if the sea was rough, an unlucky swimmer might be dashed on the rocks and killed.

In one instance, it was said, only one man escaped with his life, owing, as he reported, to his having been warned by Make-make not to make the attempt. When the hopu arrived on the mainland, he handed over the egg to his employer