The Thrill Of Victory, The Agony Of Defeat In The Open Water

At the women’s marathon run at the 2012 London Olympics, the differences in the between marathon runners and marathon swimmers was evident in a number of ways.

As the marathon runners ran themselves to exhaustion, they crossed the finish line completely spent, occasionally collapsing to the ground. Each one of them was shown clearly and distinctively as they crossed the border.

Millions of spectator simultaneously witnessed the grimaces of their faces after 2 hours of demonstrable grit that they showed over the 42km course that wound its way around London.

Marathon running officials confirmed the athletes’ times and final places with immediacy and ease. There was no controversies, no yellow cards and no disqualifications. Neither was there any close finishes or need to use finish cameras.

Tiki Gelana won the women’s marathon in 2:23:07 as she finished a comfortable 5 seconds ahead of silver medalist Priscah Leptoo and bronze medalist Tatyana Petrova Arkhipova in 22 seconds. The separation between the gold, silver and bronze medalists – and the next 25 athletes who completed the 42km course behind them – was clearly visible to the spectators and worldwide television audience.

That will not be the case in the Olympic marathon swim where the difference between the medalists and the top 10 will be hard to distinguish with the naked eye. For several athletes, it will frankly be impossible to identify the placing without the aid of cameras and replays.

It will be that close.

Without the aid of high-speed cameras of Omega, the timing company, and instant replay by the television broadcasters, spectators will not be able to clearly make out what athletes finish in the top 10. 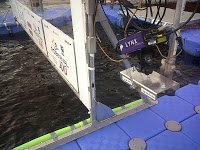 It will take some time for the race officials to confirm the final placing. A trio of officials will review the finish frame-by-frame from at least three different camera angles. They will be discussions and differences of opinions by the officials that will be objectively and thoroughly discussed and decided – outside of the review of the television audience and athletes.

Many times in professional marathon swims, it takes a long time to confirm the results of the final positions.

Let’s hope the world is not kept waiting and the officials can determine the positions relatively quickly.

But even if it takes time, especially if it takes lot of time to make a final decision, this difference between marathon running and marathon swimming will call attention to how close and how exciting the sport of open water swimming can be.

Frankly, one good thing that can happen to the sport is if the race for gold, silver and bronze is so close.

In this case, the race judges and officials must take plenty of time to come to a decision. As the judges and head referee visually confirm the final results, the television broadcasters will show the replay of the finish over and over again while the announcers describe the situation, athletes and decision-making process.

Those images of athletes swimming shoulder-to-shoulders and reaching up to touch the finish pads in a photo-finish will be another way for the sporting world to appreciate the sport.