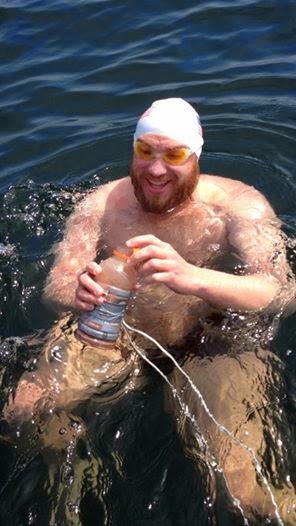 Courtesy of WOWSA, Huntington Beach, California. The Triple Crown is a long sought-after achievement in the world of open water swimming. The Triple Crown of Open Water Swimming includes a successful completion of the English Channel (England-France), the Catalina Channel (Catalina Island-California mainland), and the Manhattan Island Marathon Swim (New York City). The Triple Crown of Prison Island Swims, coined by Ned Denison and otherwise known as Triple Break, came into vogue later where swimmers escape by swimming from at least 3 of the world’s most well-known island prison swims: Le Château d’If, Fort Boyard, Devil’s Island, Île de Gorée, Robben Island, Alcatraz Island, Spike Island, Rottnest Island, and Sainte-Marguerite. Now there is another third Triple Crown on the global open water swimming circuit: the Triple Crown of Lake Monster Swims that includes solo, bioprene crossings of Loch Ness (Scotland), Lake Tahoe (California-Nevada, USA), and Lake Memphremagog (USA-Canada). Coined by Phil White of the Northeast Kingdom Open Water Swimming Association, the Triple Crown of Lake Monster Swims may have its first pioneers in 2015. “Sarah Thomas and Craig Lenning [shown above] of Colorado and Elaine Kornbau Howley of Massachusetts, are expanding their search for plesiosaur-like lake creatures by attempting to swim the length of Loch Ness this August,” says White who is organizing the expedition. The history of these renowned lake crossings goes back over 50 years ago. Fred Rogers first crossed Lake Tahoe lengthwise in 1955. After dozens of swimmers who followed, Thomas and Lenning both completed the first two-way crossings of Lake Tahoe in history in 2013. Following in the wake of Billy O’Connor in 1955 and hundreds of professional marathon swimmers who crossed Lake Memphremagog in the 1970s, 1980s and 1990s, Howley was the first contemporary swimmer to complete a crossing of the lake in the inaugural In Search of Memphre race in 2011. Thomas became the first person in history to double-cross Lake Memphremagog, which she did in 2013, swimming 50 miles in 30 hours. Following in the wake of Brenda Sherratt in 1966 across Loch Ness, relatively few swimmers including Kevin Murphy, Tammy van Wisse, and Michael Read have accomplished a bioprene crossing of Loch Ness. If Thomas completes the planned Loch Ness crossing, she will become the first person to achieve the cryptozoological Triple Crown. A regular pioneer of unprecedented marathon swims in the United States, Thomas will add another open water feather to her prolific swim cap in Scotland. If Lenning completes his plane Loch Ness crossing, in addition to his 2012 Lake Tahoe crossing, he can achieve the Triple Crown of Lake Monster Swims on September 6th when he competes in this year’s In Search of Memphre in Lake Memphremagog on September 6th. Howley is eying a Lake Tahoe attempt before she attempts Loch Ness, so she can join Lenning and Thomas in claiming the cryptozoological Triple Crown this August. These 3 tough lakes will take 3 monster efforts by contemporary heroes of the sport. Copyright © 2008 – 2014 by World Open Water Swimming Association