The Truth About False Bay 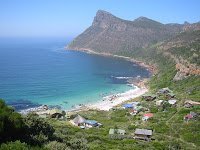 The distance across False Bay has eluded most who have tried. Annemie Landmeters, an International Marathon Swimming Hall of Fame Honour Swimmer, was the first to cross in 1989 in 9 hours 56 minutes.

While the swimmer and crew can gaze upon a picturesque coastline, the difficulty of this swim is underneath the water’s surface. In addition to strong currents and unpredictable winds and water temperatures (from 9°C to 19°C), the swimmer is swimming among one of the highest concentrations of Great White Sharks in the world where 122 shark attacks have occurred, resulting in 36 serious injuries and 27 deaths.

While Landmeters and others like Kevin Murphy, Peter Bales, Hugh Tucker and Theodore Yach swam without protection, swimmers have used Shark Shields since 2004.