The Two Tales Of A City 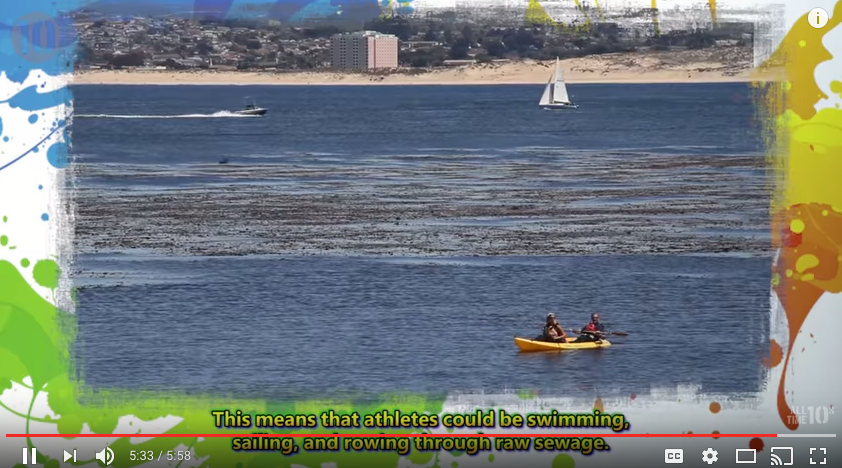 Copacabana Beach is either a cesspool of dangerous, deadly bacteria or an iconic coastline that attracts visitors from around the world.

It depends if you are a reader of American media articles or Brazilian.

But look at the reviews of Copacabana on local websites.

“Copacabana Beach is Rio de Janeiro’s most vibrant and eclectic district, with countless attractions for locals and visitors. With over 160 thousand residents, it’s almost a city within itself. The beach, landmark buildings, legendary nightclubs, restaurants, boutiques, and the trademark sidewalks are more than enough to captivate you. As you walk around and discover the parks, squares, sights, and especially the people, you will become a fan for life.”

In contrast, descriptions in English remain complimentary of the Olympic 10K Marathon Swim venue. “Beautiful Copacabana Beach is what usually comes to mind when one thinks of beaches in Rio de Janeiro, Brazil. It’s a very long, wide, crescent shaped, and is great for sunbathing and swimming. Readers have reported seeing people skimming scum off the surface of the Atlantic Ocean in the mornings on Rio de Janeiro.”

American virologist Kristina Mena predicts that it is likely that 49 of the 50 Olympic 10K Marathon Swim finalists may be infected if they swallow any water or any water somehow enters their system. “Virus levels are widespread. The pollution is so high that exposure is imminent and the chance of infection very likely.”

In contrast locally, ocean swimming in Copacabana Beach is touted. “…swimming [in Copacabana]! This Rio de Janeiro Brazilian beach has calmer waves and waters than neighboring Ipanema Beach, which makes for great wading, swimming, and bodysurfing.”

So what diseases can be obtained in Copacabana Beach?

It is unclear, but according to the Centers for Disease Control and Prevention, the leading national public health institute in the United States, describes the top causes of water-related diseases. These diseases are caused by germs spread by swallowing, breathing in mists, or having contact with contaminated water in oceans. The infections include gastrointestinal, skin, ear, respiratory, eye, neurologic, and wound infections with diarrhea being the most common.

Shigella: Shigellosis is an infectious disease caused by a group of bacteria called Shigella that causes diarrhea, fever, and stomach cramps starting 1-2 days after exposure to the bacteria. Shigellosis usually resolves in 5 to 7 days. Some people who are infected may have no symptoms at all, but may still pass the Shigella bacteria to others.

Norovirus: a very contagious virus that swimmers can get from an infected person, contaminated food or water, or by touching contaminated surfaces. The virus causes inflammation of the stomach or intestines or both (acute gastroenteritis), leading to stomach pain, nausea, and diarrhea and to vomit. Norovirus illness can be serious, especially for young children and older adults. In the United States each year it causes 19-21 million illnesses and contributes to 56,000-71,000 hospitalizations and 570-800 deaths.

E. coli (Escherichia coli): this bacteria normally lives in the intestines of people and animals. Most E. coli are harmless and are an important part of a healthy human intestinal tract. However, some E. coli are pathogenic and can cause illness, either diarrhea or illness outside of the intestinal tract. The types of E. coli that can cause diarrhea can be transmitted through contaminated water or food, or through contact with animals or persons. Pathogenic E. coli strains are categorized into six pathotypes that are associated with diarrhea and collectively are referred to as diarrheagenic E. coli.

Cryptosporidium: a microscopic parasite that causes the diarrheal disease cryptosporidiosis. Both the parasite and the disease are commonly known as Crypto. While this parasite can be spread in several different ways, water (drinking water and recreational water) is the most common way to spread the parasite. Cryptosporidium is a leading cause of waterborne disease among humans in the United States.

Cercarial Dermatitis (Swimmer’s Itch): appears as a skin rash caused by an allergic reaction to certain parasites that infect some birds and mammals. These microscopic parasites are released from infected snails into fresh and salt water. While the parasite’s preferred host is the specific bird or mammal, if the parasite comes into contact with a swimmer, it burrows into the skin causing an allergic reaction and rash. Swimmer’s itch is found throughout the world and is more frequent during summer months. Most cases of swimmer’s itch do not require medical attention.

Giardia: a microscopic parasite that causes the diarrheal illness known as giardiasis. Giardia (also known as Giardia intestinalis, Giardia lamblia, or Giardia duodenalis) is found on surfaces or in soil, food, or water that has been contaminated with feces from infected humans or animals. While the parasite can be spread in different ways, water (drinking water and recreational water) is the most common mode of transmission.

Leptospira: a bacterial disease that affects humans and animals that can cause a wide range of symptoms, some of which may be mistaken for other diseases. Some infected persons, however, may have no symptoms at all. Without treatment, Leptospirosis can lead to kidney damage, meningitis (inflammation of the membrane around the brain and spinal cord), liver failure, respiratory distress, and even death.

Algal bloom (freshwater and marine blooms): algal bloom is a rapid increase in the population of algae when water temperatures are warm and when nutrients, such as nitrogen and phosphorus, are present in the water. Blooms can be harmful when they are so thick that they block sunlight that other organisms need to live. When bloom organisms die and decompose, they deplete the oxygen in the water and starve fish and plants, causing fish kills and damaging local ecology. Some algae produce toxins and release them into the water. During a bloom, the amount of toxin present in the water can poison people, wild animals, and pets that go near the water, consume the water, or swim in the water. Cyanobacteria (blue-green algae) blooms and other algal blooms produce toxins that may be harmful to human and animal health.

With Olympic athletes now flocking to Rio de Janeiro, the reality of the situation will soon be known among the triathletes and open water swimmers.