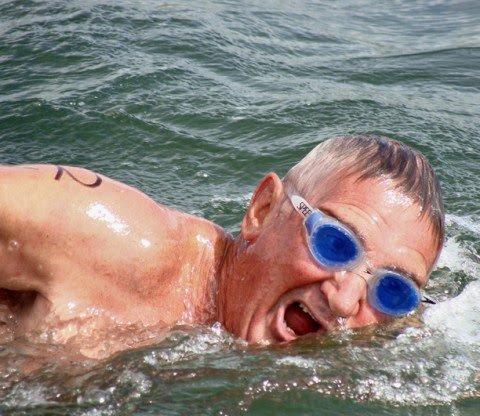 “Through the binoculars I could see that there was blood everywhere,” recalled Allison Kuhl of the Supertubes Surfing Foundation to iOL News in South Africa. “I have seen fins in the water before, but this time you could see a lot of the shark’s body. I could also see the man’s blue swimming cap.”

Now imagine paddling out directly and immediately to see first-hand what was happening and trying to help the swimmer in trouble.

That is what surfer and kayaker Terry Olivier did. Right offshore at Jeffreys Bay in South Africa, Olivier sprang into action and went out to help 74-year-old experienced open water swimmer Burgert van der Westhuizen (shown above), a victim of a rare shark attack. His comments are below.

Olivier tried to help van der Westhuizen, but he was unfortunately already lying face-down in the water as the shark was still biting. Kuhl said, “Olivier realized there was nothing more he could do at the attack scene, he paddled back as fast as he could as he was also in great danger.” He hit the shark with his paddle, but it just kept on attacking van der Westhuizen. The shark later reportedly followed Olivier’s kayak back in to shore as the NSRI (National Sea Rescue Institute) quickly came on the scene and circled the area with a Jetski to keep the shark away.

Van der Westhuizen was an experienced open water swimmer who regularly swam along the coastline of Jeffreys Bay and in the canals of Marina Martinique. Brenton Williams and his Jeffreys Bay colleagues remember him well.

Jeffreys Bay is a town located in the Eastern Cape province of South Africa. The town is situated about an hour’s drive southwest of Port Elizabeth and is a stop on the African Swim Safari tour. Jeffreys Bay is a popular tourist destination because of its surfing opportunities and its Blue Flag beach.