The Unpredictability Of The Olympic Open Water 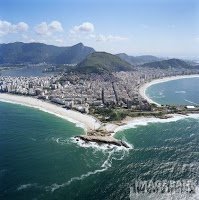 Professor Ricardo Ratto was a marathon swimming official at the 2012 London Olympic Games. There was enough pressure on Ratto’s shoulders in the Serpentine, but now the pressure is ratcheted up for the Brazilian native at the 2016 Rio Olympics.

It is one thing to be one official as part of a team of officials. It is a completey different thing altogether when Ratto is responsible for helping organize the Olympic 10K Marathon Swim in his native land at home.

“To officiate at the London Olympics was a dream come true,” said the coach and administrator.

“But at the end of this Olympic cycle, the dream will become even bigger. I am going to organize the Marathon Swimming Olympic events at home.”

Unlike the man-made rowing basin in Shanghai or the land-locked Serpentine in Hyde Park, Copacabana Beach is in the open sea, facing the Atlantic Ocean. The 10K race will be held in the most calm part of Copacabana due to a small sheltered area that is called Posto 6. “The course is protected by a peninsula that juts out from Copacabana. This means that the course is sheltered from the prevailing southwest swells which are the most common in winter in the Southern Hemisphere when we will have the Rio Olympics.”

London was a landmark in the history of the sport and set a high bar in terms of organization. It was a globally broadcast, but there were pre-race rehearsals for everybody including the officials. “The venue [of the Serpentine] that was created to host the 10K in Hyde Park was perfect. There were thousands of spectators who watched the women’s race due to the presence of Britain’s Keri-Anne Payne, the largest audience in the history of our sport.

I felt like I was taken back in time, back to the 1970’s to a packed Maracanã Stadium, Brazil’s most important soccer stadium located in Rio and scheduled to host the opening and closing ceremony. At the time, there were no public limits at major events and 200,000 spectators could attend to a soccer game. In London, the open water event made me feel the same. It was amazing! Obviously that the conditions of a man-made lake made it easier on the Organizing Committee
.”

But the perfection of the London 10K Marathon Swim presented headaches and worries for Ratto.

“After the Olympic Games I felt myself in trouble. I remembered the Pan American Games in 2007. It was quite an experience, especially since we had rough seas. The ocean conditions throughout the week of the Pan American open water swims, especially on the actual day of the event, greatly hampered the work of the organization. Swiss Timing (Omega), could not set the finish gate in the water. At the last minute, we had to ask Luarsa, a local company that runs the open water events throughout Brazil, for help. We decided to use a inflatable finish gate. But the technology needed for the results of the event could not be set, so the results were administrated manually.

The Rio 2016 Organizing Committee will have to call upon a lot of creativity and the help of experts to deal with the potential adversities, especially those who have more experience at the Copacabana venue. Specialists from Travessia dos Fortes, King and Queen of the Sea, Rio de Janeiro Swimming Federation, Brazilian Swimming Federation and the Luarsa staff, who for years have been organizing events in the Olympic venue, will find the best solutions to put on a great show under potentially rough sea conditions with ocean swells, waves in a dynamic environment
.”