The Vision And Early History Of The Maui Channel Swim 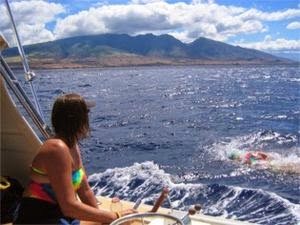 The Maui Channel Swim is an absolutely gorgeous and challenging 9.6-mile (15.4 km) ocean swimming relay race between the islands of Lanai and Maui in Hawaii.

Each team has six swimmers who rotate at fixed intervals. It is one of the World’s Top 100 Open Water Swims and is generally acknowledged as one of the sport’s most beautiful venues between idyllic tropical islands in the middle of the Pacific Ocean.

The volunteer-run Waikiki Swim Club was founded in 1971 in part to support the development of the Waikiki Roughwater Swim and masters swimming in Hawaii.

The first Maui Channel Swim was held 1972 when it was started by Jim Cotton, inspired by Bob Roper. The Waikiki Swim Club was the initial channel swim sponsor and was vital to its first decade of success and growth. In the early years, Waikiki Swim Club teams paid no entry fee and member’s entry fees were waived for the race. With such an enticing opportunity to swim in such a grand setting, it was very competitive as to who made the various teams.

“Bob Roper of San Francisco Bay: the Swimming Pied Piper of no small fame. He has been organizing and swimming all the main Bay swims since the 1960’s,” recalls Cotton. “He and his father were major athletes in the Olympic Club going back into the 1920’s. He and Frank Blair used to meet at the indoor odd-length basement swimming pool and knock off incredible intervals before going to work as pool plumber and sheriff respectively.

Bob got wind of our first annual Waikiki Roughwater Swim and in 1971 brought out the first team of non-Hawaii teams to our new swim. They were the then-rare year-round Bay cold-water swimmers. They were a rugged lot, some firemen and others who complained that the Hawaiian waters were too warm, it made them nauseous.

Intrigued by these swim animals, I invited myself to San Francisco. Bob said, ‘I’ve been thinking about the first inter-island swim.”

So the vision was set.

“That was the hard part back in those times: getting the unheard-of done. I grabbed the idea and did all the leg work since I lived in the Ala Wai Yacht Harbor on my Tahiti Ketch, recently in from a circumnavigation.”

Organizing a swim between islands in the middle of the Pacific Ocean where sharks, whales and dolphins regularly migrated between the volcanic islands was no easy task.

“We sailed over to Lanai and Lahaina on Maui and picked a starting beach. That pretty sandy beach of the Maui Channel Swim start had rocks under the water so everyone remembers me as the founder of their cut feet.”

Gorgeous water, abundant marine life and a budding rivalry between swimmers from California (San Francisco) and Hawaii (Honolulu) between the island of Lanai and Maui was a perfect setting to a masters relay classic. “The founding swim team included Bob Roper, Dennis Rice, Frank Blair, Bumpy Jones, Sam Montgomery and Lew Cook. During the second year, the illustrious swimmers of the time, including Joel Wilson and Alex Shastakof, participated.”

Long-time Waikiki Roughwater Swim Committee president Ted Sheppard recalls of the change in race management in the mid-1980’s, “Ian Emberson and Jimmy Dean managed the race until Jimmy was injured when he and Mike Miller were hit by the boat in Waikiki.

Waikiki Swim Club members had a breakaway group forming the Hawaii Swim Club around 1986-1987. With the disruptions at Waikiki Swim Club, Emberson had the foresight to continue the organizing the Maui Channel Swim.”

Hawaii Swim Club disbanded around 1992-1993 while the Waikiki Swim Club survived and Emberson and his wife Coco have continued to manage the race to this day.

The strength of the top teams have recently shifted from California and Hawaii to Australia in the 21st century. The results from 2013 include the following:

For more information on the Maui Channel Swim, visit here.