The Vision Of Double Dip Frank 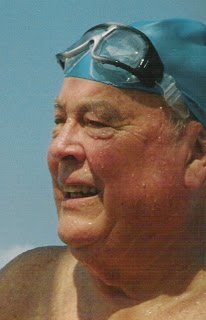 On July 21st, the 42nd Trans Tahoe Relay will be held…thanks to the vision and passion of Frank Coghlan.

The well-liked, much-respected swimming regular from the South End Rowing Club swam in the San Francisco Bay almost every day until he was 80 years old.

He also swam for years in Lake Tahoe where he envisioned a race despite the cold waters and high altitude.

In 1976, he convinced 12 swimmers – 6 from the Dolphin Club and 6 from the South End Rowing Club, to swim across the lake from Glenbrook to Homewood. When The Olympic Club of San Francisco sponsored the race, then known as the Lake Tahoe Swim, teams from Australia, Hawaii and across the continental United States joined and the number of teams began its four-decade upward trajectory.

By 1978, Coghlan swam across the Verrazano-Narrows Bridge in New York and across the San Francisco’s Golden Gate Bridge in the same day and the legend of Double Dip Frank was born. He later did his own solo across Lake Tahoe in 6 hours 37 minutes at the age of 50.

With another three decades of swimming left in him, he continued to swim from Alcatraz Island (over 50 times) as well as dozens of times underneath the span of the Golden Gate Bridge at the mouth of San Francisco Bay.

His daughter Sally Coghlan McDonald recalls the legacy that her father left in the open water. “Coghlan Beach is a small sandy beach at the end of a spit of land that forms the outer edge of the harbor behind Marina Green [in San Francisco Bay between Aquatic Park and the Golden Gate Bridge].

The beach was named for him after he was pulled in there by the tides during a long swim. He was over a mile from his destination and had to be picked up by one of the pilots. It was so foggy that day he had no idea where he was – he could not see the entrance to the harbor only a few yards away. He stood there in his Speedos and bright orange cap until one of the rowers came to get him. That may be the only time he was every picked up by a pilot boat. He was a VERY strong swimmer and finished what he started.

Needless to say, he received a lot of good-natured ribbing from the other members of the club, especially those much younger than he was. They named the beach in his honor. Though it started out as something of a joke, the name stuck. Every year since then the Coghlan Beach Fun Swim is on the calendar of local swims

For more information on the July 21st race across Lake Tahoe, visit here.