The Who’s Who Of Extremists Gather At Top Of World 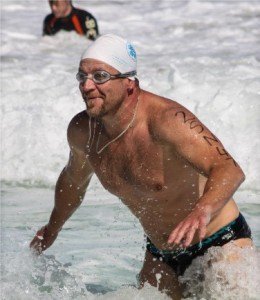 The Who’s Who of extreme swimming is gathering near the Arctic Circle to attempt a 53-mile (86 km) extreme relay across the Bering Strait.

Names familiar within the ice swimming world and well beyond will attempt the Bering Strait Swim. The relay of international swimmers was formerly known as the International Relay Swim Across The Bering Strait, but the attempt was renamed, revamped, and refinanced.

The group of ice swimmers, from Colin Hill to the UK to Ram Barkai of South Africa, from Ireland, Great Britain, USA, Russia, Estonia, Latvia, Argentina, Poland and Canada will join forces to swim from Cape Dezhnev in Chukotka, Russia, to Cape Prince of Wales in the state of Alaska, USA as they also pass by Big Diomede Island and Little Diomede Island (made famous by Lynne Cox).

The water temperature is estimated to range between 4-8°C. The committed swimmers from Ireland, Great Britain, USA, Russia, Latvia, Estonia, Poland, and Canada are listed below. Each swimmer will swim for 20 minutes at a time with an estimated 10-hour break between each swim. The swim may take 30 hours or more where each swimmer could swim up to 6 times for the planned August start date.