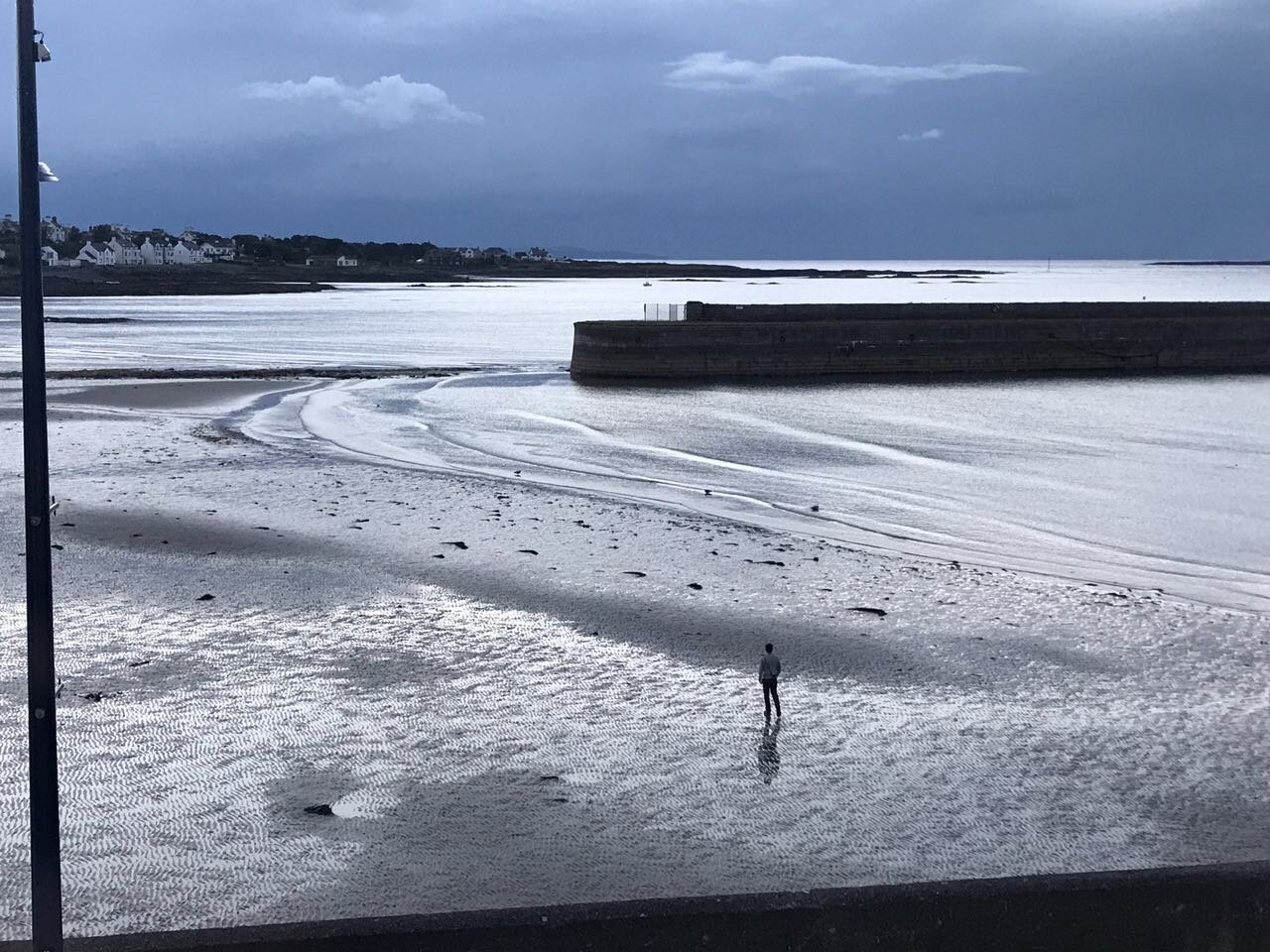 Antonio_Argüelles is standing onshore, waiting for an opportunity to cross the North Channel between Northern Ireland and Scotland.

This is his report:

This morning I did my final long training. Last night we agreed that it would be an hour just to keep my muscles loose, with no change of pace or stroke. Just relaxation as well as concentration on what’s ahead. The sky was clear, the stars were visible and the sun was rising. I started swimming and after a while I ran straight into a boat.

Fortunately it was inflatable and did not hurt. It took a few minutes to get my stroke back, but my mind was already elsewhere.

I changed course and suddenly he appeared in front of me, sitting on the ice in front of a stream that brought water from the mountains of the Himalayas, no more clothes than a loincloth that covered his genitals. Eyes closed, in complete control of his body and mind. On his bare back, a blanket. I cannot distinguish its texture, but gradually the blanket heats up until steam rises from it. From the forest a young man approaches, silently takes the blanket from the old man, plunges it into the icy waters and puts it back on his shoulders.

I concentrate more and see a red light emanating from the ascetic’s lower abdomen, the source of the heat that is drying the blanket.

The old teacher and I were together for a while before I eventually see that I have arrived at the sailboat that has served as a landmark in my circuits these last few days. I hadn’t even noticed I’d gotten that far.

When I check my watch, I see that I’ve been swimming at 12.8°C for 47 minutes, yet I feel much better than I did yesterday.

I realize that working with The Wizard is paying off.

The Wizard and I met 20 years ago. Alex Kormanovski told me about him.

“You have to meet him, Toño — he does incredible things with his mental concentration routines and Qi Gong.”

Since the beginning of our work together there was great chemistry, or, as he would say, our energy flowed.

I started to participate in his morning sessions. I liked them because they were at 4 am, which let me to get to my training early.

As the date of my first crossing of The English Channel approached, we began to practice individually. We went from Qi Gong to The Pearl exercises.

The Pearl, located in the lower part of the abdomen, is a sphere that acquires different dimensions and colors as the situation dictates.

In my first crossing of the Channel, for a long time The Pearl was the force that was pulling me. It was about the size of a basketball and had the power of a bullet. Moving with fluidity, it propelled my body forward. I carried that force from my abdomen through my body to power me.

When I made my single-season attempt for Triple Crown of Open Water Swimming in 2009, my shoulder went from being useless one day to taking me across Catalina Channel the next, without difficulty, thanks to the healing power of The Pearl. That afternoon it was blue, emanating an intense cold that little by little began to heal the shoulder.

The years passed. As I stopped swimming open water, I stopped seeing the Wizard.

Almost three years ago, when I decided to attempt the Oceans Seven, I sought him out again.

We agreed to see each other at 5 am. His center’s schedule had not changed.

“I need your help,” I said. “I want to do something very complicated, where my biggest challenge will be overcoming the cold of the waters in which I will have to swim.”

We returned to our Chi Kung exercises, Level 1 and 2.

They were very useful for the Catalina crossing in January and the Cook Strait in March.

A few weeks ago, when we started our final exercises for the North Sea, we returned to The Pearl. It started out as a simple exercise, and we gradually made it more complicated.

We went through a stage of remembering burial nights in a forest full of corn to the Tibetan master.

Before leaving for Ireland I aligned my energy and did a last exercise to take The Pearl to a very intense red. Every day since then, I have practiced having it take on the color red. Some days I succeed, on others I don’t.

Yesterday I received a message from the Wizard: “When do you swim?”

“I do not know — one day in the coming week, I hope. Is something wrong?”

“I need to charge you with energy,” he wrote.

We will let him know the exact date when we get it.

At the end of my training I turn off my timer and analyze the stats. The temperature indicates that it is the coldest water that I’ve been in so far, yet my average swimming speed of is a full 7 seconds faster than my other training days.

I close my eyes and there he is again, continuing to meditate with an intense red in his abdomen. He raises his head, looks at me intensely, and with his eyes tells me to look at the flowing water.

I open my eyes, I walk towards the stairs and suddenly the image of the green container comes to my mind.

I get the message.

* For my friend Jaime Delgado