The World Of Open Water Swimming In 1889 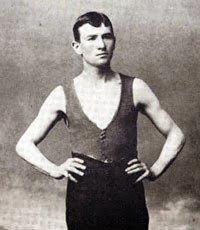 The New York Clipper was a weekly entertainment newspaper published in New York City from 1853 to 1924. It covered many topics, including circuses, dance, music, the outdoors, sports, theater, and the personalities of the open water swimming world. It had a circulation of about 25,000. The publishers also produced the yearly New York Clipper Annual.

In 1924, The Clipper was absorbed into the entertainment journal Variety.

The 1889 New York Clipper Annual posted the following notes on open wàter swimming community. It was an interesting, and most definitely a different, era of open water swimming:

February 13th: Steve Brodie [shown above] paddled and floated down the East River from Ninetieth Street to the Battery in a rubber lifesaving suit – New York City