On behalf of disadvantaged swimmers in South Africa, world record holder Theodore Yach will conduct a courageous charity swim in an icy Atlantic Ocean challenge off Cape Town, South Africa – a 35K swim from Hout Bay on the mainland to Robben Island right through Great White Shark territory due to a crowded seal colony on Duiker Island.

Theodore will be vulnerable as he attempts to become the first swimmer to attempt and complete this swim as the seals are the primary food source for Great White Sharks which will be circling underneath Theodore for most of his swim. 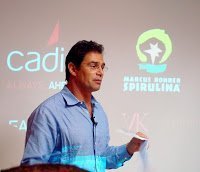 Theodore, an ambassador for multi-nutrient Marcus Rohrer Spirulina estimates he will be in the water for up to 12 hours in water that can drop down to 10°C (50°F). He is using the swim to raise funds for the Cadiz Open Water Swimming Development Trust which promotes swimming at grassroots and supports disadvantaged swimmers. He is calling for donations of R100 per stroke (US$0.14) for as many of the 34,000 strokes he expects to complete this challenge (or a total of US$486,000).

“Too many people drown in buckets and in small pools of water in South Africa. This shouldn’t happen. Through the Trust’s fund raising efforts, such as this swim, we hope to make a small contribution by helping teach people to swim and assisting swimmers from poor communities who can’t even afford transport to get to training.”

Ram Barkai, chairman of the Trust and himself a world-class cold-water swimmer, described the challenge as among the toughest swims in the world. “Very few swimmers would even attempt, let alone complete this challenge. It’s a mammoth swim and we applaud Theodore’s courage in undertaking this attempt to help disadvantaged swimmers.”

His attempt will also highlight Cape Town’s shark awareness campaign which promotes respect for sharks and responsible use of the ocean. He has teamed up with the Save Our Seas Foundation that funds research, education, awareness and conservation projects worldwide, including Great White Shark research in Cape Town. Cheryl-Samantha Owen of the Save Our Seas Foundation explains that sharks should not be vilified as man-eaters, but rather respected as a vital part of the marine ecosystem. “We need to change our perceptions of sharks. The reality is only five people on average die from shark bites a year out of a global population of over 6.5 billion.”

“Since the 1950s, the populations of many shark species have declined by as much as 90 per cent. The Great White Shark, one of the most feared animals of all, is powerless to the onslaught against them. They are among the millions (estimates range from 60-100 million) of sharks killed by fishing fleets each year. Sharks are the lions and tigers of the sea and are essential for healthy oceans. When we enter the water, we enter their territory and it is important that ocean users take responsibility for themselves and adhere to the shark warning flags that form part of the shark spotting programme in Cape Town.”

With all due respect to the sharks, Theodore will use a Shark Shield and a shark spotter on his support boat.

Last year, Theodore raised R150,000 (US$21,500) for disadvantaged swimmers while setting a world record by becoming the first person to swim 30K from Cape Town around Robben Island and back in 10 hours and 39 minutes. The money went to support 40 swimmers who are training to enter the 7.5K Cadiz Freedom Swim in 2011.