There Are Always Sharks, No?

The Associated Press distributed a warning this week by the National Parks Service that cautioned swimmers to enter the ocean water at their own risk after three attacks on California sea lions by Great White Sharks were seen over the last few months around the Channel Islands.

The volcanic island of Anacapa, the ruggedly isolated Santa Cruz Island, Santa Rosa Island which has been inhabited by humans for an estimated 13,000 years, San Miguel Island, and the small Santa Barbara Island, all between 12-40 miles off the California coast, are not only home to tens of thousands of pinnepeds, but also home to the world’s largest aggregation of blue whales in the world. It is estimated that approximately 10% of the global blue whale population gathers around the channel islands during the summer.

The National Park Service officials said Great White Shark in Southern California are rare, but because of the potential risk, a warning was instituted Wednesday and will remain in effect until further notice. They also reported that migrating sharks usually pass through without stopping for meals.

However, it is also true that the rocky shores of Anacapa are perfect resting and breeding areas for California sea lions and harbor seals and there are large colonies of breeding seals and sea lions on Santa Crus. In addition, on San Miguel, there are over 30,000 seals and sea lions that breed, pup, and hang out on the island’s 27 miles of isolated coastline at certain times of year. On Santa Barbara, there are resting elephant seals. 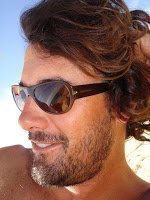 We believe only three attacks on pinnipeds over the last few months seems like an extremely low estimate given the extraordinarily large amount of potential mammalian food.

Hank Wise, shown on left, who will be swimming across the Catalina Channel in September – quite possibly in the path of these Great White Sharks was reflective of the sharks’ presence, “The sharks are always there. It’s basic. They are always there, just a part of the eco-system. They just don’t tend to eat humans, not as yummy as seal pups.”