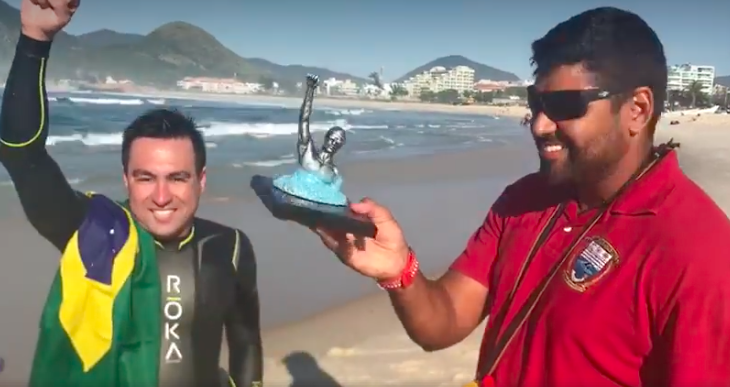 Today, Thiago Toshio Rebollo is a Brazilian open water swimmer who set the neoprene record for the 35 km Travessia do Leme ao Pontal between Leme Beach to Pontal in 7 hours 2 minutes 34 seconds, breaking the record of 7 hours 34 minutes.

The Travessia do Leme ao Pontal was founded and is managed by Adherbal de Oliveira and Renato Ribeiro Barbosa. Their efforts were nominated for the 2017 World Open Water Swimming Offering of the Year along with the following eclectic mix of products, events and services:

The nominees for the 2016 World Open Water Offering of the Year are as follows:

Adherbal de Oliveira and Renato Ribeiro Barbosa were honored for the Travessia do Leme ao Pontal with the following description:

The Travessia do Leme ao Pontal is a scenic 35 km coastal swim in Brazil that ends in Pontal and was inspired by a famous song in Brazil called Do Leme ao Pontal. The ocean challenge offers great natural beauty where the swimmer can admire from a privileged perspective the wonders of Rio de Janeiro including Sugar Loaf, Copacabana Beach, Christ the Redeemer, Cagarras Archipelago, Ipanema Beach, São Conrado Beach, Barra da Tijuca Beach and the Pontal Stone. Adherbal de Oliveira and Renato Ribeiro Barbosa created a governing body (Leme to Pontal Swimming Association) that enables solo and relay attempts for neoprene and bioprene swimmers along the gorgeous course.

For creating a professional infrastructure complete with escort pilots, crew, guidance and record-keeping to support marathon swims and relays, for encouraging marathon swimming among people who are inspired to repeat the lyrics of a popular song, for offering opportunities throughout the year in temperatures that can range from 15°C to 26°C, the Travessia do Leme ao Pontal is a worthy nominee for the 2017 World Open Water Swimming Offering of the Year.