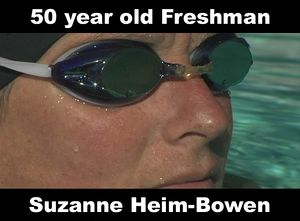 Deborah J. McDonald, Director and Producer of the feature documentary, 50 year old FRESHMAN: Suzanne Heim-Bowen, won her third award for the film at this week’s 2013 Beloit International Film Festival. The recognition was for the Power of Film.

The BIFFY award went to McDonald who featured Suzanne Heim-Bowen‘s journey among swimmers less than half her age at Diablo Valley College. The film – largely centered in a pool – explores the universal themes of hard work and discipline and opportunities in the second half of life.

At the 2012 Indie Spirit Film Festival, McDonald won the Best Sports/Outdoor Feature. In May, it garnered the Best New Film Award at the 2012 International Aquatic History Symposium & Film Festival. “Suzanne’s story is an inspiration to all women, whether they are 15 or 50 or 80 years old.”