This Is Why They Swim Across America 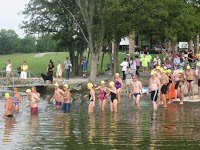 The NBC Nightly News broadcast coverage of Jedd Wolchok, MD, PhD who heads up the Swim Across America Laboratory at the world-renowned Memorial Sloan Kettering Cancer Center in New York.

Dr. Wolchok, an oncologist who specializes in the treatment of melanoma, led the effort at the Swim Across America Lab to develop ipilumumab, the first melanoma drug to be approved by the United States Food & Drug Administration agency in over 13 years.

Swim Across America Executive Director Janel Jorgensen proudly comments, “Jedd and his team are now taking that drug and, in combination with radiation, seeing even more promising results. He hopes that the same approach they are doing for melanoma could work with kidney, lung and other cancers.

Swim Across America is so proud to continue to support all the incredible research that Jedd and his team are doing at Memorial Sloan Kettering Cancer Center. They are doing incredible work. Discoveries like this are why we swim and do what we do
[raising over US$41 million].”