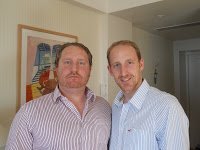 Courtesy of WOWSA Live, Huntington Beach, California. Superstar professional marathon swimmer Thomas Lurz and his older brother and coach Stefan Lurz are on WOWSA Live today. A fierce competitor, a multi-lingual gentlemen and a respected voice in the pro marathon swimming world, Thomas and Stefan talk about training, racing and their outlook for the 2012 London Olympics 10K. Thomas is currently open water swimming’s most dominant athlete – having won a gold medal in the world championships in 2004, 2005, 2006, 2007, 2008, 2009 and 2010 for an amazing nine overall world titles in the 5K and 10K distances in various oceans and lakes around the world. He is also the bronze medalist in the Olympic 10K Marathon Swim from the 2008 Beijing Olympics. Thomas is a humble and gracious champion, respected by all his rivals and competitors and coached by his older brother. In this week’s WOWSA Live, they explain the training demands placed on the elite marathon swimmers and the tremendously difficult training sessions that Thomas does. They describe some of their workouts and the sacrifices Thomas makes to stay on top of the sport – despite being one of the oldest men on the professional circuit – and tells of his experiences at the 2008 Beijing Olympics and his dreams for Olympic gold at the 2012 London Olympics. Like others at the highest echelon of the sport, Thomas’ road to Olympic glory is not easy and certainly is not a given. He must struggle, sacrifice and work every single day to prepare for a race that will take almost two hours, but will undoubtedly be decided by mere tenths of a second. Every turn, every stroke, every tactic and every surge can lead to success – or failure in a sport where everyone must expect the unexpected. Copyright © 2008 – 2011 by World Open Water Swimming Association