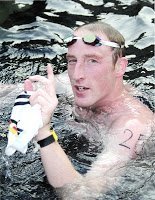 The latest pro marathon race in Shantou, China showed a bit of the past, present and future at the highest echelon of the sport.

Thomas Lurz reinforced his lead by winning the sixth leg of the FINA 10KM Marathon Swimming World Cup yesterday. No stranger to the top of the podium in marathon races, Thomas won his second World Cup race this season in 1:54:22.95 over 27 men. On the women’s side, American Emily Brunemann won her first international victory, giving her a boost towards the future as she bested 14 other women in 2:04:52.41.

In a show that may also be indicative of the future, Chinese men Zu Lijun and Zhang Zibing were close behind Thomas, finishing second and third respectively in 1:54:23.19 and 1:54:26.86. Winner of the 2010 World Cup series Chad Ho of South Africa finished in fourth place while Greece’s Spyridon Gianniotis, the current world 10K champion, finished in fifth.

Former world champion Angela Maurer and German teammate Nadine Reichert finished very closely behind Emily in 2:04:52.72 and 2:04:55.78, respectively. Emily explains, “The pace of the race in the beginning was very slow and relaxing. Very untypical for open water races that I have been in. I sat back the first two loops then started to take a different line and lead most of the rest of the race. I looked at it as five 2k’s descend and that’s what I did. Every loop felt a little faster. I felt great throughout the whole race and had a lot of energy in the end.”

In a German show of the strength this season, Thomas and Angela are both leading the World Cup rankings this season. The final rankings will be determined after the last World Cup race of the season in Hong Kong on October 2nd.