Thomas Lurz, German Consistency At The Top In Open Water 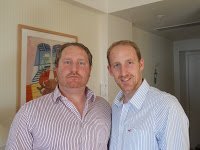 Way back in the pre-Olympic marathon swimming era at the 3rd FINA World Open Water Swimming Championships held in Dubai in 2004, Thomas Lurz was making a name for himself as a 25-year-old world champion open water swimmer.

In the river through the heart of Dubai, he won a dramatic come-from-way-behind victory over Alan Bircher of Great Britain who had built-up an early 400-meter lead in one of the most dramatic international races ever held.

And, remarkably, 8 years later, humble, soft-spoken 33-year-old is still leading the charge with a focus and precision true to his German roots.

Leading up to the 2012 London Olympics, the bronze medalist in the marathon swim at the 2008 Beijing Olympics trains full-time with the German military that supports Olympic athletes. He is renowned for being a very tough workout swimmer that enables his success in international competitions.

Like a typical pool swimmer that he once was, Lurz uses a variety of equipment and interval sets to develop an ability to average less than 1:07 per 100 meters for 10,000 meters – without the benefit of walls or turns. “We do around two hard kicking sets per week, but also I do kicking sets and pulling sets in nearly every training session which helps with recovery…it’s easier to swim with pull buoy.”

But easy does not enter his workout vocabulary much. “I have done many hard workouts in my life. I don’t know exactly which one was the hardest, but I have done a 15,000-meter straight freestyle set in a 50m pool without stopping. I also did a 10 x 800 freestyle set and 60 x 100 freestyle, trying to go under 1:02 every 100 meters.” With those kinds of sets, it is no wonder he has been leading the pack at international competitions for nearly a decade.

While every swimmer has their inner team and support crew, Lurz’s inner circle is truly family. “My brother [Stefan Lurz] will be in London with me as the German open water head coach. I also have tattoos: one with the Olympic rings and one with the birth date of my father who died in 2007. He always supported me a lot.”

With such a support team, great things are expected in London for the long-time German open water swimming superstar.