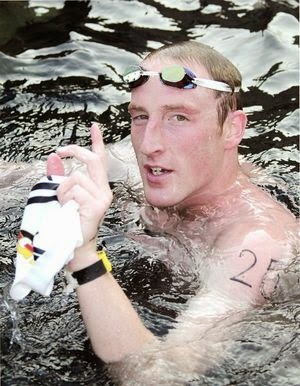 Thomas Lurz is on the rise.

He won the bronze medal in the Olympic 10K Marathon Swim at the 2008 Beijing Olympics.

He won the silver medal at the 2012 London Olympic Games.

He is only missing a gold.

It would be remarkable for the German star to capture a gold medal in the 10 km marathon swim at the 2016 Rio Olympic Games in Copacabana Beach. It is quite easily within his capabilities as he continues to swim well and train hard.

Lurz will get his first taste of the 10 km marathon swim course on Copacabana Beach in Rio de Janeiro this week at the King and Queen of the Sea (Rei e Rainha Do Mar).

Having Lurz become familiar with the Atlantic Ocean course will only give him another advantage over his competitors.

Bronze, silver…and perhaps a gold…this road is being paved by one of the greatest open water swimmers in history.

The televised stage of the King and Queen of the Sea, one of the World Open Water Swimming Offering of the Year nominees, will be broadcast live in Brazil on TV Globo this Sunday.