Thoughts About The Great Wave off Kanagawa 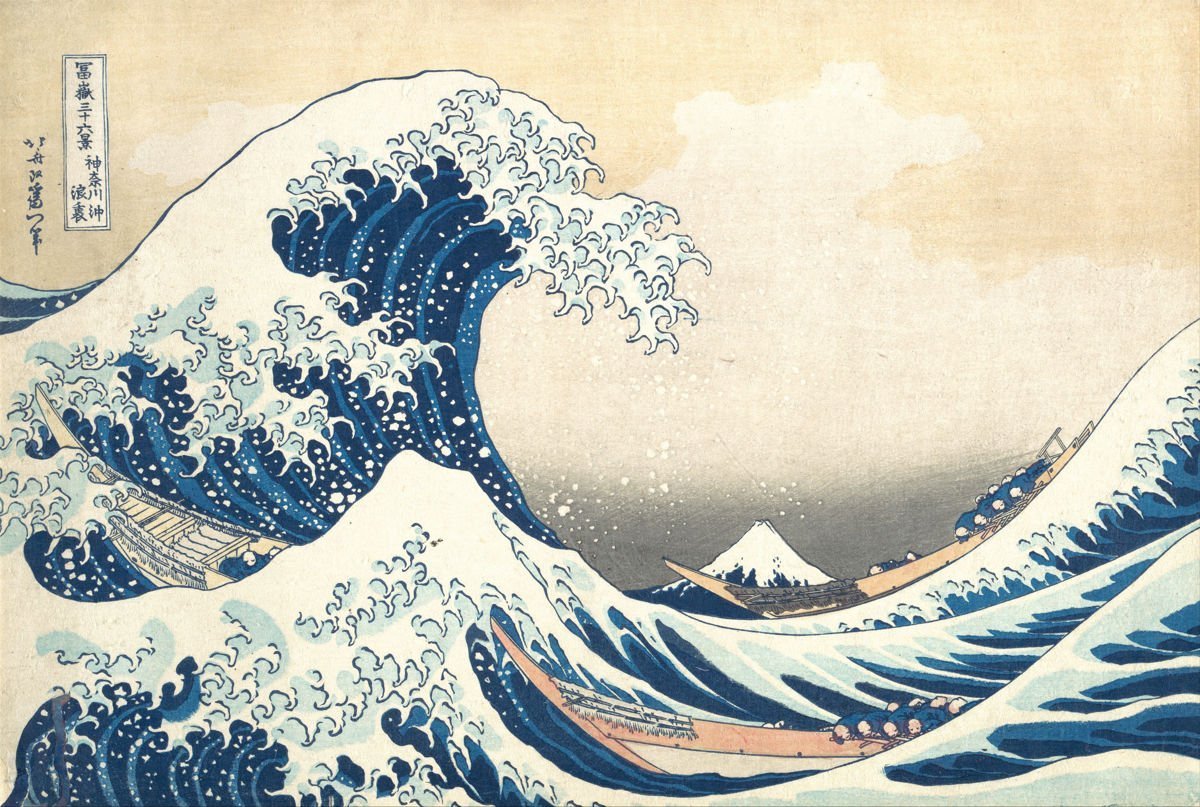 The Great Wave off Kanagawa (神奈川沖浪裏), also known as The Great Wave or simply The Wave, is a famed ukiyo-e print by Japanese artist Katsushika Hokusai, published sometime between 1830 and 1833 in the late Edo period as the first print in Hokusai’s series Thirty-six Views of Mount Fuji (富嶽三十六景).

It is Hokusai’s most famous work, and one of the best recognized works of Japanese art in the world. It depicts an enormous wave threatening boats off the coast of Kanagawa Prefecture. While sometimes assumed to be a tsunami, the wave is, as the picture’s title notes, more likely to be a large okinami (“wave of the open sea“). As in all the prints in the series, it depicts the area around Mount Fuji under particular conditions, and the mountain itself appears in the background.

“This print reminds me two interesting points,” commented Steven Munatones. “Firstly, Hokusai was probably in his early 70’s when he created this masterpiece. Like many of modern-day open water swimmers who are in their latter stages of life in their 50’s, 60’s, 70’s, 80’s, and 90’s, Hokusai’s success became apparent in his latter years.”

In his book The Formula: The Universal Laws of Success, Albert-László Barabási writes about Hokusai who wrote himself at the age of 75, “All I have produced before the age of 70 is not worth taking into account. At 73, I have learned a little about the real structure of nature. When I am 80, I shall have made still more progress. At 90, I shall penetrate the mystery of things. At 100, I shall have reached a marvelous stage, and when I am 110, everything I do, whether it be a dot or a line, will be alive.”

Swims by 61-year-old Ram Barkai in the ice down in Antarctica and by 67-year-old Pat Gallant-Charette across lakes, and attempts of the English Channel by 77-year-old Dr. Otto Thaning, their efforts remind of how people can continue to seek and achieve success – like Hokusai – in their older years.

“Secondly, this artwork with Mount Fuji in the background, reminds me of the beautiful Five Lakes of Mount Fuji. Any one of these lakes would be optimal location for the Olympic 10K Marathon Swim. These lakes are located in a majestic setting that would very beautifully show off Japan’s most famous geological landmark,” said Munatones.

“Swimming in the clear, clean Lake Kawaguchi – only 90 minutes from Tokyo – with Mount Fuji majestically in the background – would present a magnificent setting and would give a wonderful image of Japan – much more so than swimming in the dirty, still, polluted water in Tokyo Bay at Odaiba Marine Park as scheduled for the 2020 Tokyo Olympic Games.”