Three For Three In Ice Down Under 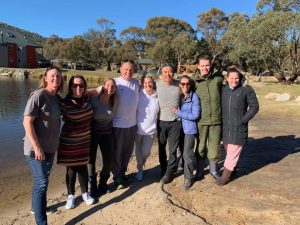 Three For Three In Ice Down Under

Kennedy reports, “Both Tara and Ben are accomplished channel swimmers but they are both new to cce swimming.  Both of  them had to complete a qualifying 1 km ice swimming distance a few days before they could attempt the official Ice Mile distance.

With the help and guidance from Wyatt Song, they prepared their body’s by sitting in large chest freezers filled with ice.

They both achieved the Ice Kilometer with ease.  Wyatt contacted Ram Barkai to discuss the urgency of qualifying their 1 km ice swim under International Ice Swimming Association rules, so they were green-lighted to attempt the Ice Mile.

The morning of my mile attempt, the small lake had frozen 5 mm and water was 1.9°C , so we broke up with our safety kayak and had to wait until the sun naturally thawed the ice.  Eventually it did and the water is now at 2.6°C with air at 8°C.  I swam over the mile distance, but struggled mentally to achieve my goal.  I guess the jet lag and 6-hour drive directly from the airport with only 1 day of rest, took it out of me.

The morning of Tara and Ben’s Ice Mile attempt was another story.

The lake had frozen hard up to 15 mm thick.  Wyatt Song broke out a lane with his kayak, but realized that the ice was much thicker.  We decided to go to lower lake called Crackenback Lake which measured 4.8°C so both the swimmers and the crew were really happy.

Tara went first and completed her Ice Mile to becoming the first Australian women in Australia to do so.

Ben also completed his Ice Mile in speedy fashion.  With a large support crew and recovery knowledge using our cars as a heat source, both Australians recovered well.  All the Ice Miles are now ratified by International Ice Swimming Association.”