Three Is A Crowd, But Italy Stands Out In Eilat 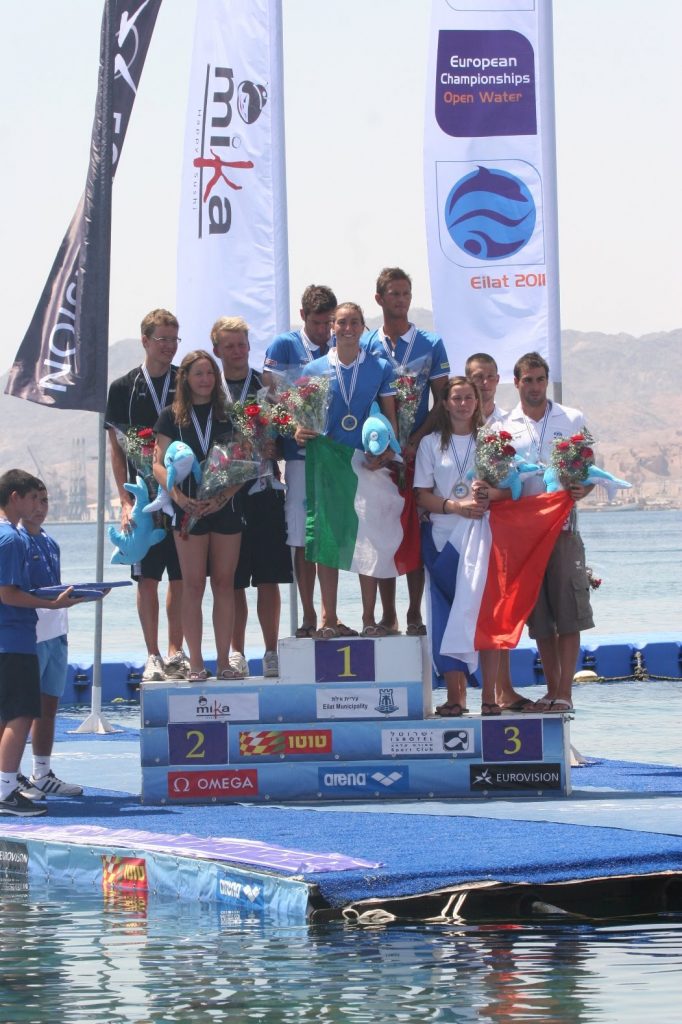 Italy was expected to win the 3-person 5K Team Event at the 2011 European Open Water Swimming Championships in Eilat, Israel and won in major fashion by over one minute.

Like shoes and clothes that go well together, the Italians were a smooth, streamlined trio of trademark teamwork. “We are training with this team for a long time already, and this is why we found our best tactics: both men in front, Simone Ercoli and myself at the same height, and Rachele Bruni between us and just a little bit behind, so that we can drag her. We knew throughout the race that we were in the lead. It then became a pure time-trial effort to do our best,” explained Luca.

Germany allowed their veterans to rest and asked their 2011 European Junior Champions to represent their country.

Svenja Zihsler and Rob Muffels (both 2011 European Junior Open Water Swimming Champions in the 5K) as well as European Open Water Swimming Cup winner Hendrik Rijkens. Rob Muffels was all smiles, “We are a junior team and our aim before the race was to finish at least in fifth place. After a while we three then managed to swim well together. We saw the French team which started one minute ahead of us, tried to catch up, and this effort eventually gave us an unexpected Silver medal.”

France also drew on its next generation of stars: Coralie Codevelle, Damien Cattin Vidal and Sebastien Fraysse. “My two ‘boys’ were great, they dragged me all the time. We only had a problem when we had to pass the Spanish team, because both teams were at a turning buoy, which makes it very complicated. I think that we lost some time there,” explained Coralie.