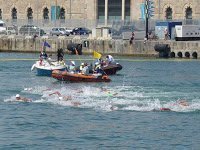 John Dussliere discusses the status of American open water swimming and how the community is populated by Project Riders, Project Designers, Project Hybrids and Project Authorities in a hard-hitting commentary, meant to help elevate the sport in general and USA Swimming in particular.

His goals, which is achieved by the American swimming community via an annual US$25+ million budget focused on 310,000 pool swimming members, include Build The Base, Promote The Sport and Achieve Competitive Success.

There are three national governing bodies and countries in particular whose open water swimming model in particular are currently achieving those three goals: Great Britain, Italy and Brazil. And there are many other nations heading in that direction with increasingly positive and high levels of success – from Singapore to the Cayman Islands, from Mexico to Argentina, from Japan to Ireland.

His commentary is here.