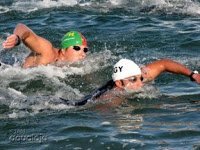 Rick Walker will be a busy coach at the 2012 London Olympics.

The former long-time coach of the USA Swimming National Open Water Swimming Team, Walker also coaches Mazen Aziz of Egypt (shown on left) and Csaba Gercask of Hungary in college. The 22-year-old Egyptian and his Hungarian teammate, who both represent the Southern Illinois University Salukis during the American college reason, will put on their country’s colors on August 10th and race the world’s best at the Olympic marathon swimming 10km.

Walker (shown on left) reported from the Olympic Village as one of the official coaches of the Egyptian national swim team. “Mazen has made his adjustment to time change and to a new location. He is soaking up every Olympic moment.

Workouts are going well and Mazen is showing stability which is good just before we begin to go into that final stage of preparation for the big race [in the Serpentine on August 10th].

We are heading over tomorrow to the course and get acquainted with the set-up.”

Faced against competing against the the world’s best, Walker has devised a strategy for his athlete. “In order to be in the hunt, he is going to have to be in touch. [The Olympic 10K] will not be a race that he can reel in the pack. You are either with them or you are fighting the entire race.”

And both coach and athlete know the race will be like no other. “I think the pace will be pretty fast at the beginning and the swimmers are going to have to be able to hold on. With the temperatures as low as they are, laying back might put you in difficulty over the full course. I think this is probably one of the most savvy experienced groups we have seen ever. The venue will add to the strategy in some areas and take away in others. For example, navigation should not remotely be a factor [in the Serpentine], but pacing and conservation will be factors. When and how early the lead group makes a move will make or break many of the swimmers.”

Aziz, a Muslim, was also faced with another issue unfamiliar to his rivals in the open water. Because the Olympics is being held during the Muslim holy month of Ramadan, the 22-year-old had to make a difficult choice: focus on the 10K or or maintain a fast during Ramadan. If he strictly followed the tenants of his faith, Aziz would have to avoid eating and drinking from sunrise to sundown at a time when he needs fuel to stoke his Olympic dreams.

While a fast would essentially rule out any hope for an optimal performance from Aziz or other Muslims competing in London, an interpretation of Islamic teaching allows that “according to Hanafi scholars, it’s permissible to break fasting while traveling if the duration will not exceed 15 days. … If a person was to stay in his country of destination more than the mentioned duration, he must fast as long as he is able and it won’t impose difficulty on him.”

Based on this interpretation, Aziz will postpone his fast…and gear himself up to a fast marathon swim.

For more information and predictions of the Olympic 10K Marathon Swim, visit here.