Three Times Is A Charm For Miyuki Fujita

Miyuki Fujita, the Japanese Queen of the English Channel (7 successful crossings), added another marathon swim to her illustrious career.

She completed the first three-way crossing of Suruga Bay, south of Tokyo and within view of Mount Fuji. The deep Suruga Bay, with its tidal flows, is well-known in Japan and was captured in woodblock art by Japanese artists (shown on left). 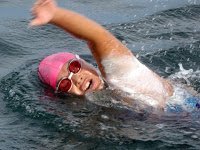 In the words of Cliff Golding, “Miyuki is the kindest, most helpful, unassuming, yet tough-as-nails woman.”

For more photos, visit here. To read Miyuki’s own words on the swim in Japanese, visit here.