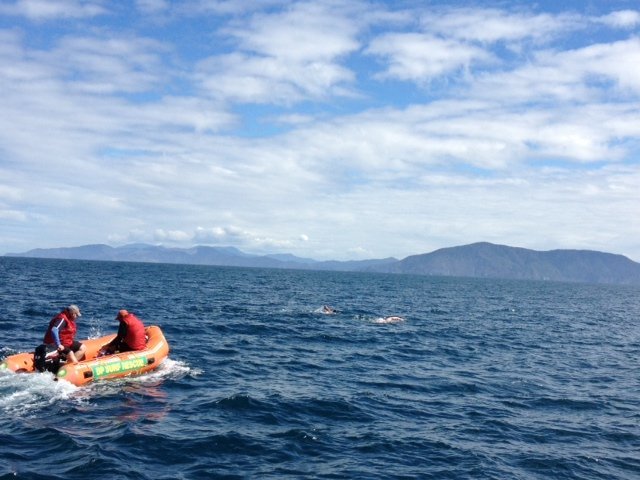 Donal Buckley calls this year’s 14ºC (57ºF) water temperatures in the North Channel “unrealistically and possibly not likely to be repeated for a generation.”

And swimmers are taking advantage of those once-in-a-generation conditions.

But their successes and the much-warmer-than-usual temperatures do not mean conditions can quickly change and the beast of the channel will return to haunt its aspirants.

So Darren Miller is, characteristically, taking no chances.

Miller is planning an unprecedented Three Rivers Marathon swim on August 3rd where he will begin and end his 9-hour training session at the Heinz Field launch ramp in Pittsburgh, Pennsylvania. after swimming across the Allegheny, Monongahela, and Ohio Rivers. This swim is in preparation of Miller’s upcoming goal to swim across the North Channel in Northern Ireland and become the first American male to complete the Oceans Seven challenge.

Miller has already completed 6 of the 7 channels of the Oceans Seven: the English, Catalina, Molokai, Strait of Gibraltar Strait, Cook Strait, and Tsugaru. But the North Channel presents the mightiest of his challenges. And therefore his training has been as intense and difficult as he has been training at Keystone Lake and traveling throughout the United States to push himself out of his comfort zone.

“I have always desired to complete a marathon swim in the beautiful rivers of Pittsburgh. Being that the distance of this swim mimics the length and time it will take to complete the North Channel, I am looking forward to utilizing this event as a training opportunity. In addition, I hope to motivate members of the community to create their own personal challenge, as well as raise awareness for Team Forever and the Forever Fund’s efforts to help families each and every day.”

Miller created Team Forever and help establish the Forever Fund with Cathy Cartieri Mehl and their families, to aid families in their struggle to afford the costs associated with infant cardiothoracic surgery at UPMC Children’s Hospital. Miller accepts charitable donations through Team Forever for the Forever Fund on www.darren-miller.com. 100% of all donations benefit the Forever Fund because Miller is fully sponsored by Trustmont Financial Group for his swimming ventures. To date, approximately US$65,000 has been raised through Miller’s efforts.