Thrice As Nice With The Virginia Open Water Swims 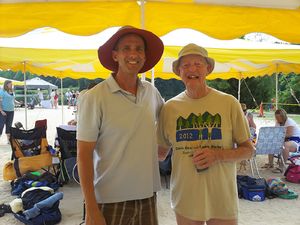 The Virginia Open Water Series is a new 3-race, 3-month series held in Virginia that includes the Jack King 1-mile Ocean Swim in Virginia Beach on June 23rd, the Chris Greene Lake 1 or 2-Mile Cable Swims in Charlottesville on July 13th, and the Lake Moomaw 1-Mile Swim north of Covington on August 3rd.

The Jack King 1-mile Ocean Swim kicks the series off in Virginia Beach with a salt-water competition held under the long-time direction of Ray McDaniels.

Then the series heads to the fresh water.

The Chris Greene Lake Cable Swim, directed by Dave Holland, continues the momentum where masters swimmers of all backgrounds and corners of the globe have been flocking to compete in the 1- and 2-mile races since 1977. Beginning in 1980, Chris Greene Lake has also been a frequent site for U.S. Masters Swimming National Open Water Swimming Championships.

The Lake Moomaw Swim culminates the series with a 1-mile open water swim in Lake Moomaw that is run by Sandra Denius Wright and Dave Holland.