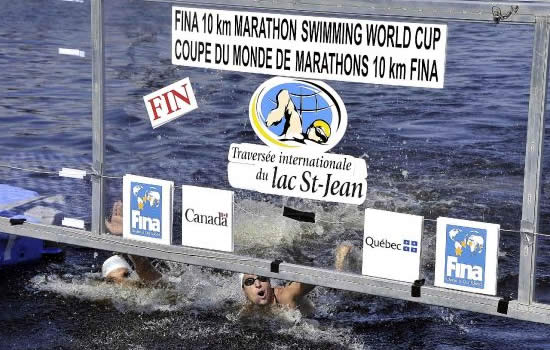 With most of the world’s fastest swimmers at the FINA World Championships in Shanghai, the fields at this year’s professional marathon swims in Quebec are much lower than normal, but the racing is still world-class exciting – and nearly too close to call.

Andrea Volpini of Italy barely – by the slimmest of margins – beat Argentine rival Damian Blaum in a extremely close race at the Traversee international du lac St-Jean 10K marathon swim this past weekend.

The finish thrilled the always supportive crowds at the Traversee finish.

Meanwhile Nadine Reichert of Germany had a much easier time in her nearly 8-minute victory over the women’s field.

The final results are as follows: