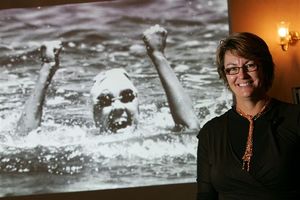 Carissa Moore is changing the face of surfing. The Honolulu native is the world surfing professional champion and became the first woman to receive a wildcard entry into the men’s Triple Crown of Surfing. Personable and attractive, her voice is rapidly becoming more influential as she emerges as one of surfing leading spokeswomen and talents.

The 20-year-old is the daughter of Chris Moore, an an outstanding open water swimmer in the 1980’s and 1990’s who won the 1990 Waikiki Roughwater Swim. 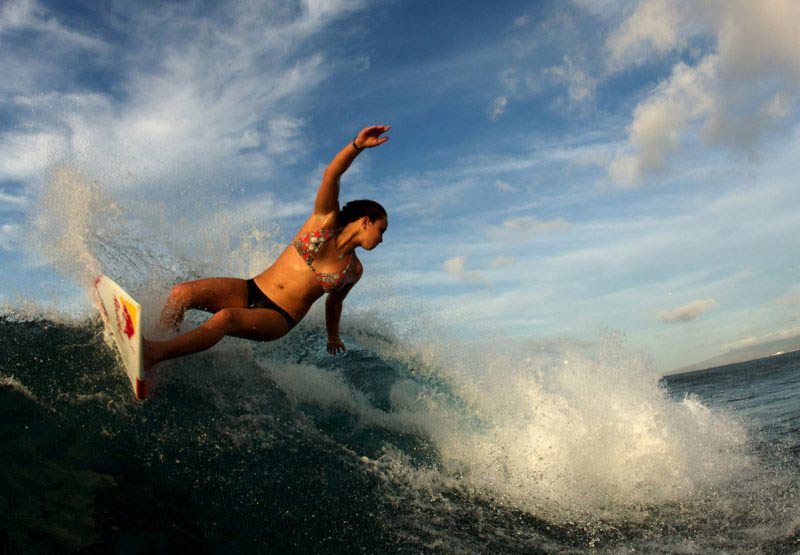 Chris runs the North Shore Swim Series, a circuit of 4 races along some of the gnarliest surfing shorelines in the world. Both father and daughter have deep roots in Hawaii and are entirely comfortable in the ocean. Like her father before her, Carissa brings a seriousness and passion for her sport. And that dedication has enabled her to win 6 Association of Surfing Professionals tour events. Heavily sponsored, she has graced surfing magazine covers and combines the lifestyle of a global-trotting surfer and seriously dedicated athlete with world-class skills.

But Carissa still finds inequality between the prize money and conditions that men and women face on the professional surfing circuit. “I make my living off of my sponsorship deals, not the prize money,” she explained to The Red Bulletin. “I think the women should be respected and rewarded for what they do.” She is bold and fearless which is exactly why she was invited to the men-only Triple Crown of Surfing.

“The guys definitely do charge bigger waves and they do bigger airs and stuff, but the girls are so close to getting to where the guys are. [But] I really do care for the state of women’s surfing. I want to see surfing for women to go so much further than just me. When I’m done, I’d like to leave behind a great legacy.”

These women also faced a number of inequalities, most significantly competitive opportunities and prize money. And Taylor-Smith did something about it. She went head-to-head with the top professional marathon swimming men in the world. Very much like Greta Andersen and Judith van Berkel-de Njis before her. Taylor-Smith had to line up at the start of professional marathon races and fight for every single dollar of prize money against the men. Women were not given separate cash prizes during and before her era; the pot of money was fixed and it was up to both men and women to swim faster to get the larger prizes.

“Men made me rise to the occasion,” explains the Australian 7-time world champion. “They forced me to train harder and swim faster. I owe a lot of my success to my male competitors.”

But when Taylor-Smith took the overall top prize for the 1991 World Professional Marathon Swimming Federation and beat all the top men en route, the men had enough. It was time for separate cash prizes to be offered. The shift in the mindset of the professional marathon swimming world was cataclysmic. It would never be the same. Women would compete for a cash pot equal to that of men – and they would not be competing against each other.

“I have won many races around the world, but I think this change in prize money and the recognition given to women marathon swimmers is my greatest legacy.” It will be interesting to see if Moore can replicate what Taylor-Smith and her predecessors did in their respective sports. History is waiting to see if Moore can carve out a similar legacy as she continues to carve up ocean waves big and small around the world.