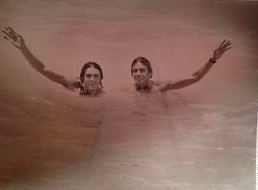 “I had the Guinness Book to show me what was possible,” recalls butterflyer Vicki Keith. “I moved forward with the assumption that if they could do it, so could I.”

“I’m only a beginner on this trail, and haven’t the vision or drive that Vicki had,” admits butterflyer Brian Suddeth.

“But in my own small way, I’m blazing a similar path. It inspires me to attempt things others go bug eyed at. These things are only impossible in the mind that stops you from the attempt. Preparation, practice and possibilities can take you [only so] far.”

So thought Keith herself when she set off on her own career. “It’s impossible to swim the English Channel using the butterfly stroke. I heard this over and over again as a young marathon swimmer. I was told that 2 men and one woman had attempted the crossing, but the farthest they had been able to complete was 2 miles. The two men we’re twin brothers, James and Jonathan diDonato. They held the distance butterfly record at 40.6 miles, but they had been unsuccessful at their attempt at swimming across the English Channel using the butterfly stroke.”

With these failures in the 1970s and 1980s, observers thought butterflying across the Channel was out of the realm of possibility. But many in the open water swimming world face – and overcome – that word from those on terra firma. “I have always had a real problem with the word impossible,” says Keith. “Anything is possible if you believe in yourself and are willing to dedicate yourself body and soul. So I decided to pick the major marathon swims of the world and complete them all using the butterfly exclusively.”

In retrospect, it is understandable why Keith was successful and how she was inspired by the Tiger Twins. “The advantage was I wasn’t limited by other people’s perceptions. It was like moving into the challenges with a clean slate.”

Keith took diDonato mark to heart. “The first world record I focused on was twins James and Jonathan’s 10-mile butterfly record. I decided to swim 12 miles. Halfway through my swim, the Kingston Whig Standard informed me that the twins had recently set a new record and they had swum 47 miles butterfly. I shrugged my shoulders as I was treaded water and said, ‘That’s OK, I will set the women’s world record.'”

The Tiger Twins not only had their own inner drive, but also each other to support and push each other. They moved to Fort Lauderdale, Florida in 1975 to become lifeguards and pursue their passion for swimming.

Like others in the pool and open water swimming community in the 1970s, they were pushing the boundaries of training. From the Russian pool swimmers regularly doing 30,000 meters per day to the animal lanes focusing on distance freestyle, the 1970s were an era of exploration. Siga Rose and Penny Dean were taking the workouts of Greta Andersen and Ted Erikson to another level with triple workouts and 30,000m pool swims at a 1:20 pace per 100 meters.

And so were the Tiger Twins.

Their normal workouts included swimming butterfly for 4 hours in the ocean wearing drag suits. They wore 1-pound wrist weights when swimming to increase their arm strength while combining an intense dryland program of running 3 miles worth of sprint intervals, plus 20 sets of 50 pushups and countless sit-ups with a 20-pound weights on their chests.

Each generation from Andersen and Erikson to Keith and Dean were moving the bar upwards.

As were the Tiger Twins. They started with a 10-mile ocean butterfly swim in 1980 followed by a 12-miler in 1981 and a 16.5-miler in 1982 in 14 hours that had intended to be a 20-mile swim. By 1983, they had circumnavigated Manhattan in 9 hours 43 minutes and done all kinds of other butterfly swims in the New York area. Ultimately, they planned a 60-mile butterfly swim from Honeymoon Harbor on Gun Cay, 17 miles from Bimini in the Bahamas, to Palm Beach, Florida.

Their international crossing was stopped after 40.6 miles and 20 hours 6 minutes into the attempt, but they had inspired others to see what was possible. They swam with soap flakes in their suits to discourage sharks. But when storm clouds started to appear and lightening came down, the U.S. Coast Guard ordered them out of the water. They had gone to the limit. Even their escort shark divers protecting them were too exhausted to continue.

But their early butterfly legacy had been set.