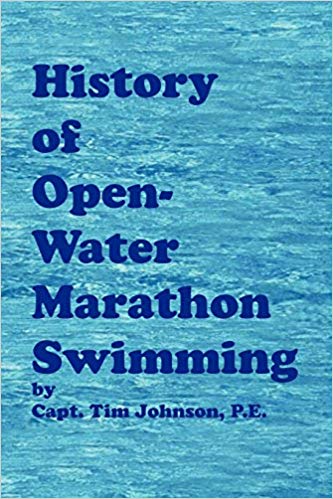 Dr. Tim Johnson, a captain and professional engineer, wrote a book entitled History of Open-Water Marathon Swimming that was based on his background in navigation for swimmers in the around Manhattan Island Marathon Swim and development of computer analysis for that swim course.

After a study of historical swims, the application for this knowledge around the world became apparent and he undertook a writing to communicate these findings for select swims. He described numerous swims and included them in what was to become a book about the history of swimming.

The book is over 500 pages with 700+ references and up to 500 different swims mentioned.

The history is complete through 2004, but due to the last decade’s explosion of open swimming events created to accommodate the worldwide interest.

The book does not cover all swims, most professional swims, swims shorter than 10K (except in the historical period), nor does it list all the swims for the English Channel, except for one swim of historical note that puts Diana Nyad’s historic technical swim from Cuba into context.

Tidal principles and current flows discussed apply to all start times for swims in open water and to the extent that a swimmer can incorporated a favorable flow in their swim will result in a faster transit time.

The book is available on Amazon.com.

Dr. Johnson has also authored Finding A Job In Tough Times, Performance Sailing on a J29, Stud of the Hudson: A Swim in Twenty Stages, and Introductory Digital Logic Labs: A Graphical Approach to Logic Design.