Timing Swimmers In The Pool vs. The Open Water 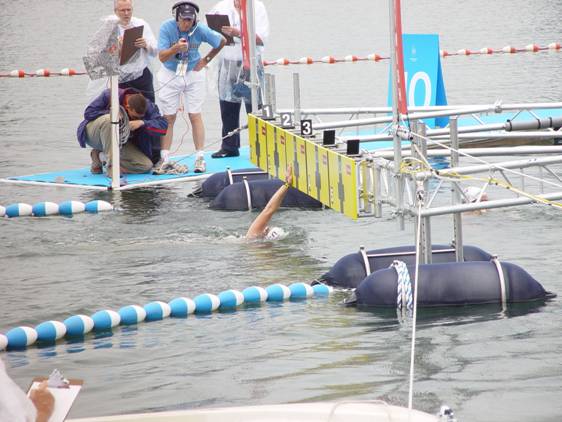 In pool swimming competitions around the world, pool swimmers are timed by electronic touchpads. These plastic touch pads have sensitive pressure switches connected to a timekeeper’s console that instantaneously registers a finish.

In the Olympics and some major competitions, a high-speed camera and three time judges are used in case of a mechanical malfunction.

In contrast, major open water swimming competitions use touchpads as simply a finish pad. In open water swimming, athletes wear one transponder on each wrist, but these devices are used for timing purposes. The transponders are activated when the athletes reaches up to touch the finish pad that are elevated over the surface of the water. But the official placing of the swimmers is determined by a visual check by race officials viewing the video cameras.

These video cameras are positioned at or near the finish pads. Officials review the video images to record the finish of the athletes. Sometimes, the finishes are so close that the officials have to repeatedly review the images and collectively judge who won and who lost. These photo finishes are often incredibly close that the officials have to review the images frame-by-frame. At 1000 frames per second, these cameras demonstrate how close these finishes among open water swimmers really are.

So while the touchpads in the pool are the final arbiters of the official positions with video cameras as back-up, it is the video cameras that take precedent in the open water.

In local amateur open water swims where the amateur swimmers run up to the finish on a shoreline or finish in the water, Open Water Source still recommends that finish cameras are used.

Use of video cameras at the finish of local open water swims with lower budgets and less sophisticated equipment than at major international competitions have the following benefits:

1. If the timing system fails, the video camera’s internal timing mechanism can be used to give swimmers their times.

2. In the case of close finishes or controversy at the finish, the race judges can review the video images in order to make a final call.

3. Some images at the finishes can be used to create promotional videos for next year’s race or in a highlight reel of the actual race and uploaded to the Internet.