To Bubble Or Not To Bubble – That Is The Question 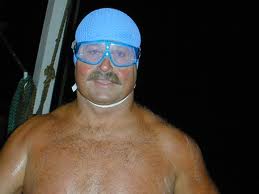 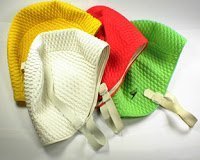 In the Marathon Swimmers Forum, Evan Morrison of the Santa Barbara Channel Swimming Association collected and analyzed the opinions of 175 former, current or aspiring marathon swimmers from around the world.

His comprehensive analyses are posted here.

It was very interesting snapshot of the community that is estimated to include at least 710 channel swimmers and 6,500 marathon swimmers in size. Morrison did an excellent job analyzing and presenting the information.

One of the controversial items found among the myriad survey results was the use of bubble caps in the sport of marathon swimming. Unlike the old-fashioned wool swimsuits that admittedly felt warmer than today’s swimsuits made out of synthetic materials, bubble caps are still around and remain in use from swimming pools around the world to the English Channel, although some marathon swimming organizations like the NYC Swim and races like the Manhattan Island Marathon Swim have outlawed them.

As Morrison pointed out, “If an item is controversial, it is in some way approaching a line in the sand. In marathon swimming, if you’re flirting with this line – trying to find loopholes for some extra edge – quite simply, you’re doing it wrong.”

When it comes to use of bubble caps, the survey found that 57% of the marathon swimmers were against the use of this type of swim cap. Perhaps many of these swimmers feel – and know – that use of a bubble cap makes the head feel warmer, especially with those styles that have chin strap and are held snugly against the head and covers the ears? From that perspective, these swimmers may feel bubble caps are a “loophole for some extra edge” – an unfair advantage at least compared to the standard swim cap.

But there are various ways to look at this controversy and 43% of the community is accepting of the use of bubble caps.

We wanted to check out the situation for ourselves, so we did a test in what that is cold by our own personal standards. In an ocean swim in the 55ºF (12ºC) Pacific Ocean in Huntington Beach, California, we felt the bubble cap feels warmer overall relative to other caps. This is an admittedly personal impression, and may not be true among every open water swimmer. Furthermore, we have no way of confirming if our head or core body temperature was actually elevated due to the bubble swim cap. Upon diving into the cooler-than-we-like Pacific Ocean, the water easily and quickly seeped into the bubble cap with the first impression that this bubble cap was no help at all. The head felt a bit cool, certainly cooler than a tight-fitting modern-day silicon cap. But then, like swimming through a much-appreciated warm patch of water, the water inside the cap seemed to warm up and act as a slight insulation against the colder water outside enveloping our body. Also, because the cap was held snugly to our head and around and over the ears with a strap, this gave the cap a “heat advantage” over the standard silicon, latex or Lycra swim cap.

But are bubble caps a loophole for some extra edge? That is difficult to answer in the affirmative in our opinion.

The reason why is because bubble caps have been long used in the English Channel – even among such channel stalwarts as Kevin Murphy, as ingrained as part of marathon swimming lore as anyone currently living, and others like Carol Sing and Linda McGill. Back in the 1930’s when bubble caps first started to be manufactured and distributed around the world, there were no silicon or latex swim caps as we know them today. So, like the wool swimsuit, there are plenty of historical precedents of use of bubble caps in marathon swimming.

Unlike the neoprene caps of triathlon vintage, bubble caps have a long history of use in the English Channel and marathon swims around the world. If history is any guide, there were fewer alternatives to the bubble cap in the earlier generations. So from our perspective, use of a bubble cap is not a loophole in the rules; rather, they are part of marathon swimming heritage.

But the fact that controversy over the use of bubble caps reigns and the majority of marathon swimmers are against their use. While most sporting goods stores and online retailers sell the more popular latex, silicon and Lycra swim caps made popular by Olympic pool swimmers, old-school bubble caps are not as readily available…or even cool-looking from the perspective of the younger generations.

What is a bubble cap or a bubble crepe cap as they are more formally called? They are swim caps made of latex or thicker silicon that have a stretchy bubbly texture to them and often a chin strap to keep them in place. Their use has been discussed by the Channel Swimming & Piloting Federation and currently permitted as they are judged to not retain heat or aid buoyancy. The bubble caps are a part of the standard of swimwear that has been long allowed on English Channel swims and have been worn for record swims by swimmers such as English Channel swimmer Chris Blakeslee aka El Sharko of the South End Rowing Club in San Francisco California where he swims almost daily in the cold 62ºF or less waters of the bay. El Sharko recommends the bubble caps highly as they come in head sizes unlike most other caps and the strap helps keep them on in surf and rough water swims, he has a following of other bubble cap swimmers who agree that the bubble cap is great for open water swims. For working out or for those not yet acclimated to cold-water conditions, they provide an option for double capping over a silicon cap and are easy to put on over top of a neoprene cap for visibility and added warmth in other open and cold water swims.

Photo shows Chris Blakeslee in his blue bubble cap before his English Channel swim. He and his bubble cap colleagues favor orange or red colored caps while training in the San Francisco Bay.