To Infinity And Beyond To Scotland 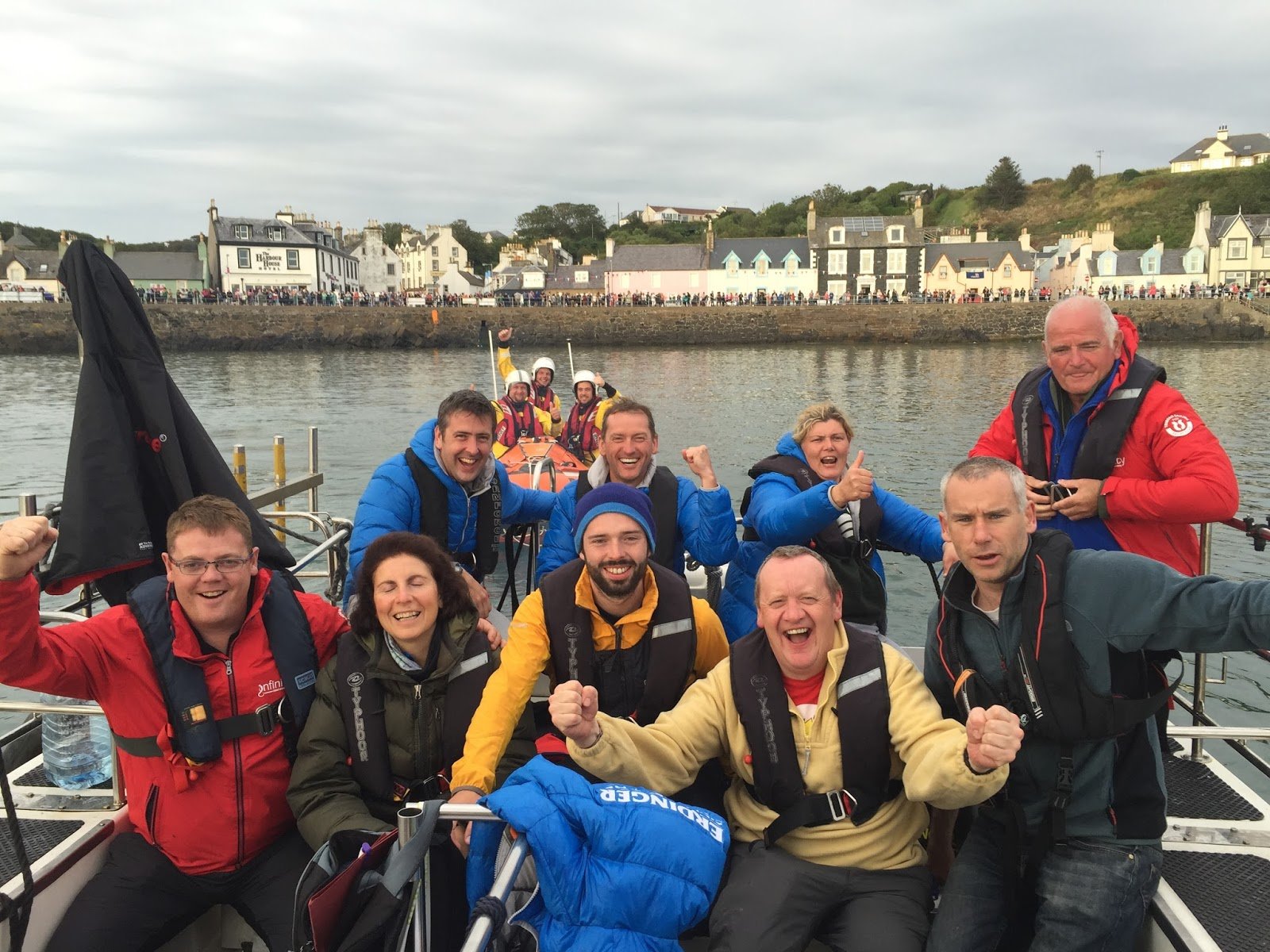 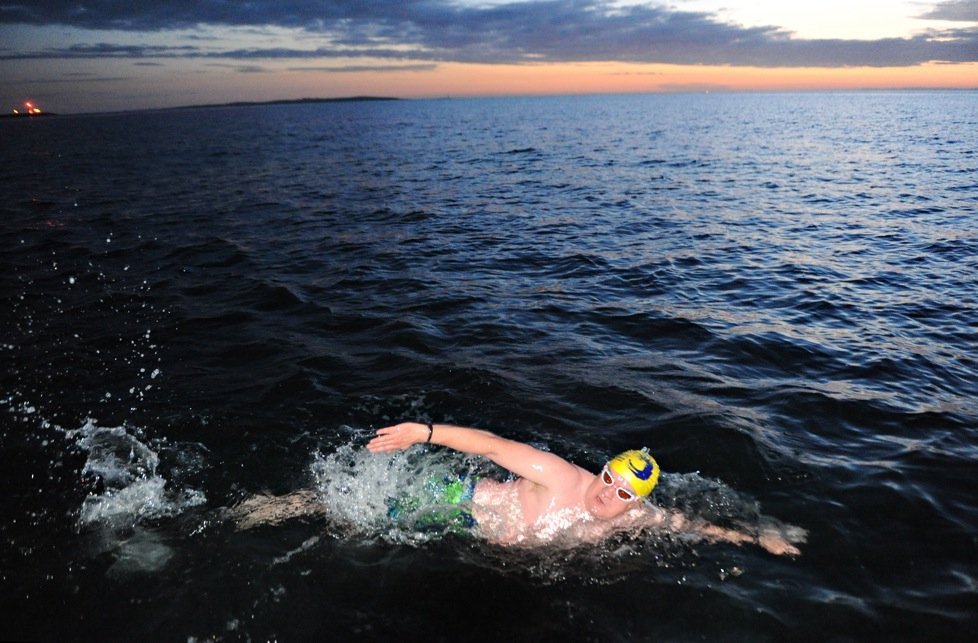 The Infinity V relay of Gillian McShane, Joe Belton, David Burke, Thomas O’Hagan and Noel Grimes made history on August 7th after 13 hours 15 minutes as the first five-person relay across the North Channel.

The open water quintet made their finish extra special by making landfall at Portpatrick Harbour to a regalia of RNLI lifeboats and crowds who had gathered for the annual RNLI festival. The Infinity V team receiving an escort from the RNLI John Buchanan Barr boat.

The members of Infinity V were brought together by their common bonds of ice swimming and open water swimming in Camlough Lake; however, they were relative beginners in the open waters of the the North Channel. Both McShane and Belton’s swim resume included participation in the Guinness Book-recognized record relay swim at Camlough lake in 2009. McShane, O’Hagan, and Grimes participated in the Ireland Ice Swimming 1K Championships. Burke was the sole veteran as he had his first taste and success in the channel with the Eleven Feet relay team in 2014.

Infinity V’s work up to the swim was not a smooth one with injuries and weather challenges, but each swimmer got over their personal challenges. The threat of Milo McCourt‘s big stick gave them a smile to help them on their way.

“‘Never get comfortable with the sea as it will always surprise you‘ is never too far from the thoughts of any swimmer as the rough waters of other North Channel swims this season proved,” said Mallon. “But on this occasion, the surprise was the sweet gift of a powder blue sky that met its reflection on a flat calm blue sea.

Three boats crossing on August 7th, each escorting North Channel aspirants to their destination. “Brian Meharg with Rohans More, the first Indian swimmer to make the crossing; Quentin Nelson with Guernsey man Adrian Sarchet; and Infinity Channel Swimming with Richard Lafferty and the Infinity V team. It was the first time three boats with a similar heading were on the Channel together. It may be a first of many as this channel begins to open up its offerings of success to swimmers of all abilities. Infinity V, in particular, showed that anything is possible.”

Burke was first to swim leave landfall at Robbie’s Point just out of Donaghadee harbour Co. Down. “At 4:42 am dressed in jazzy jammer swim shorts, his favourite yellow CLWF silicone swim cap, green glow sticks to ensure his visibility at dawn, Burke had Bruce Springsteen’s Dream Baby Dream reverberating in his head. Swimming on the week of his 50th birthday, his fast pace that challenged even Martin Mallon on many early mornings at the Newry Leisure Centre gave the team a good advance at high water.”

O’Hagan, hailing from Co. Armagh, took over from Burke. “His happy-go-lucky attitude helped him hit the high seas with speed and vigour. Thomas is a member of Queens Triathlon Club and his training with Peter Williamson and the lads there gave him a good chance at distance in the water. His recent spell in Italy swimming at altitude also helped his fitness.”

Belton was next in the water. “A fireman from Co. Down, Joe was tasked with the turning tide. A brief of fast swimming as if he were headed on a 999 call issued by the acting watch commander resulted in his three swims all executed excellently – one swim for each of his children.” 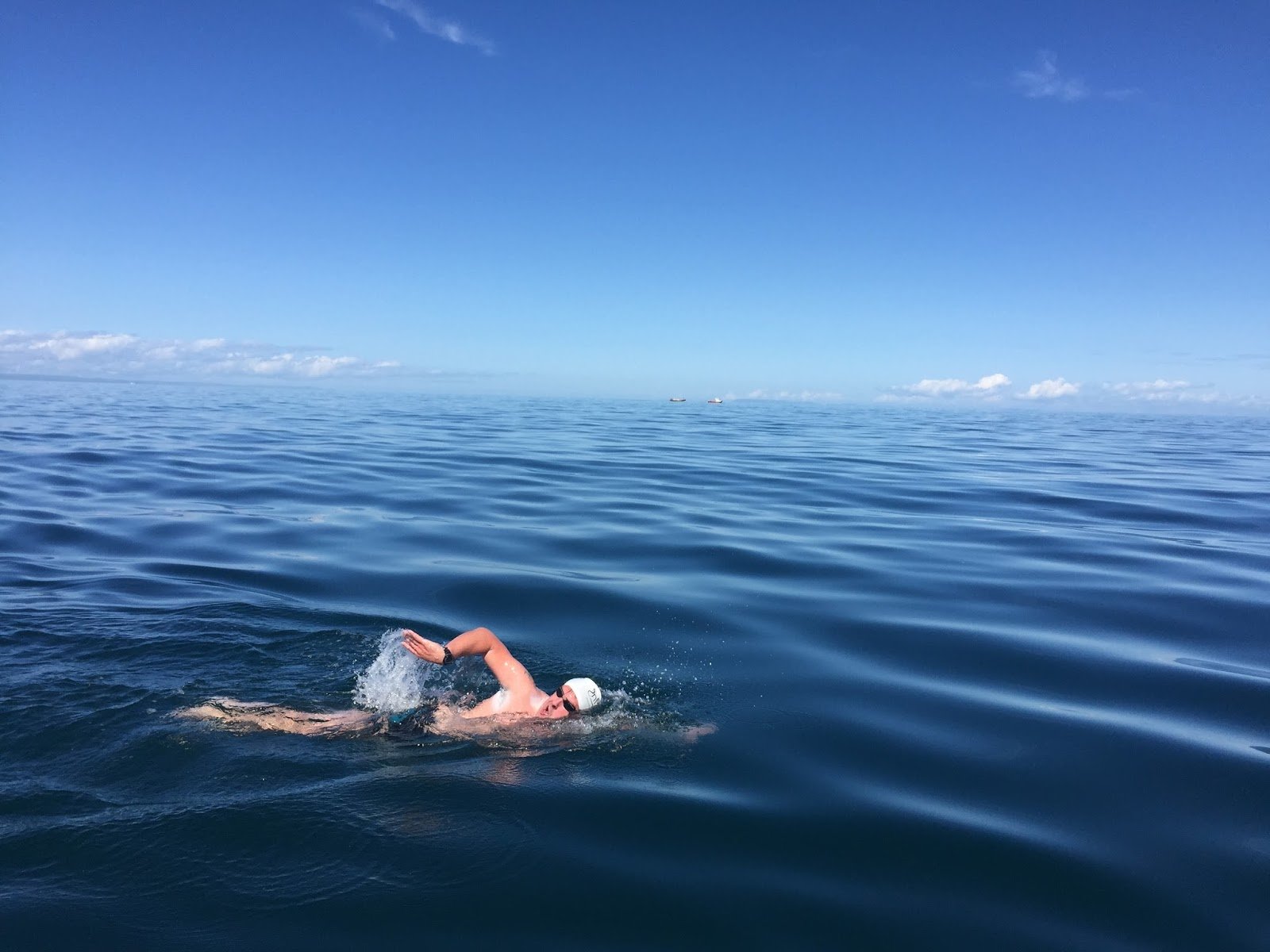 Taking over from Belton was Grimes, a Co. Louthman with a triathlon background. “Noel’s quiet and proficient demeanour showed in his swimming, getting the job done, dancing one stroke at a time towards the Portpatrick lighthouse. The only thing breaking the clearness of the blue of the sky and blue of the water were the smacks of jellyfish and the regular appearance of porpoise and dolphins. Noel would take the 13th swim slot and the bright lilac painted Waterfront Hotel in Portpatrick was his guide. Noel had never been to Scotland and arrived in style, swimming into the harbour to a rapturous applause of crowds gathered for the annual RNLI celebrations.”

The fifth swimmer of the rotation was McShane who was ever so gallant and unafraid to take on a challenge. “Her Blue Step Out of the Ordinary envelope changing her life achieving an Ice Kilometer and an Ice Mile in the 2015 Ireland Ice Swimming Championships. Negativity is not in her vocabulary and the support of her friends and workmates gave her a smile to light any darkness. I was not afraid to push her limits knowing she had plenty to give. She had to swim for all she was worth because her’s took on the tough part of the tide. Gillian played a poignant role getting two of the tougher tidal flows, but showed no remorse of the jellyfish and resistant water. Onwards she swam as the first rotation became the second and the third. Each team member recovered quickly from mild hypothermia and jellyfish stings. Each relay rotation was correctly executed and observed by Iryna Kennedy.

With the original heading as the Portpatrick lighthouse, they were told Infinity V would finish in the harbour to celebrate Scottish soil. To land at Portpatrick harbour is a feat enjoyed by only a few North Channel swimmers.”