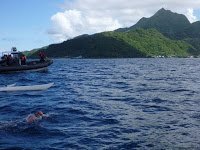 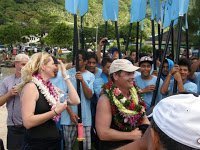 In May 2011, Bruckner Chase completed a historic 9-mile swim from Aunu’u to Utulei in Amerika Samoa.

He was honored by High Talking Chief Fuiava and the village of Aunu’u with the honorary matai title, Uila o le Sami (“Lightning in the Ocean” in English). When asked by the Governor if there was a means to positively impact the youth of the Territory, Bruckner and his wife Michelle Evans-Chase created the Bruckner Chase Toa o le Tai youth ocean heroes program.

Their goal is to improve ocean swimming proficiency and to educate the community about the need to respect and protect the oceans. The program, launched with the support of the Department of Commerce and Fagatele Bay, is underway and is now clearly executing on its goals.

Bruckner and Michelle have returned to Amerika Samoa to once again journey from Aunu’u to Utulei. But this time Bruckner will not be swimming solo.

As he replicates his initial swim, he will be joined in the water by a relay team of Amerika Samoan swimmers, including Nicky Pulu, Christina Pulu, Alesana Alesana and Daniel Saifolo, and American lifeguard Graham Parker. The team will be composed of students and instructors in the Toa o le Tai (“Hero of the Sea“) program as well as members of Marine Patrol. Each member will rotate through 15-minute legs for the duration of the expected 5-6 hour journey to Utulei Beach.

Later this year, Bruckner will swim across the Apolima Strait as the subject of a documentary film that will highlight both Samoas to the world.

The 9-mile Aunu’u to Utulei Relay Swim is scheduled for May 12th from Aunu’u harbor to Utulei…with a whole new generation of ocean swimmers.