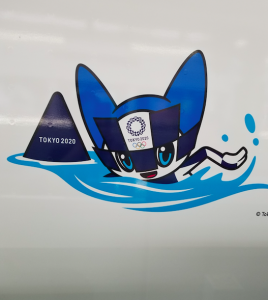 With the oppressive summer heat in Tokyo and humidity hanging over Odaiba Marine Park, combined with the 29.5°C+ (85°F+) water temperatures in Tokyo Bay at the Tokyo 2020 Marathon Swimming Test Event, the men’s race start was moved to 7:00 am.

The water quality in Tokyo Bay was an issue that was previously addressed by the local authorities.  The team leaders and coaches who participated in the Test Event were not worried and seemed to be satisfied with the improvement of the venue and water quality.

The course was enveloped with a polyester underwater screen to eliminate bacteria from entering the venue.

However, some Japanese media and athletes still reported a desire for continued improvement in the water quality to leave as part of the 2020 Tokyo Olympic legacy.

But the heat seemed to be the biggest challenge for the athletes. The three American representatives did not finish the shortened race in the 30°C water. The race was reduced from its planned 10 km to 5 km Japan’s Yumi Kida who trains in Tokyo commented, “It is essential to take measures against heat. It was really hot.”

“The top coaches have begun training for warm weather conditions,” observed Steven Munatones. “They need to prepare their athletes for not only warm water temperatures under high humidity and a blazing sun, but also because these athletes are racing in very tight, all black techsuits and snug swim caps, their swimwear is increasing in the impact of the heat. This acclimation process takes a long time to adequately prepare.

Australians Nick Sloman and Kareena Lee, who finished first together among the swimmers from 12 countries, commented on the heat. “It was a really valuable experience to have a hit out on the Olympic course and get a feel for what we’ll face next year in Tokyo,” Lee said. “With one year to go until the Olympics, we now have a good understanding of the conditions and we’ll be prepared for the heat – it was definitely very warm conditions.”

Sloman said the water quality was still being worked on. “Entering into the race there was a lot of speculation regarding the water temperature and quality, so that’s one of the reasons why I was eager to test this venue. The water was quite dark and cloudy, and I couldn’t really see past my elbow, but in saying that it’s not out of the ordinary to swim in these conditions.

I’m aware there are procedures in place and an organizing committee are working very hard to make sure the water is safe to race in.”

Munatones heard there may be alternatives to the heat, “Reportedly, FINA may decide to move up the time of the races at the Tokyo Olympics to as early as 4 or 5 am in order to avoid some of the morning heat and humidity.

But WOWSA has been writing for years that Japan, the IOC and FINA have a beautiful alternative to Odaiba Marine Park that is situated close to the center of Tokyo: Mount Fuji. Mt. Fuji is a beautiful, unique, cool water alternative for the 2020 Tokyo Olympic 10 km marathon swim.

Because each country loves to showcase its famous national landmarks and venues at the Winter and Summer Olympics, Mt. Fuji makes sense. In Sydney, Australia at the 2000 Olympics, events like the triathlon passed by the Sydney Opera House. At the 2004 Athens Olympics, the shot put event was held in ancient Olympia, site of the ancient Olympic Games and the marathon run started at the site of the Battle of Marathon. At the 2016 Rio Olympics, the marathon swim will be held in the world-famous Copacabana Beach.

Odaiba is smack dab in the middle of a metropolitan area of over 20 million people. While the Japanese wastewater treatment facilities and technology is world class, the rivers that run through the Tokyo area all pour into Tokyo Bay. Besides being a heavily industrialized area, land reclamation around this area has been carried out since the last 18th century. The water is just not clean – especially if a rain occurs and there is urban runoff.

One very beautiful alternative – and a venue that would clearly showcase one of Japan’s most famous landmarks – is the Five Lakes of Mount Fuji.* With no industry around the area and a well-established resort area, the water is fed by the snow runoff of Mount Fuji.

The water is beautifully clean. Swimmers can not only stare down below towards the depths while swimming, but they can also turn their head to breathe and observe one of the most remarkable volcanoes in the world.

Five Lakes of Mount Fuji (富士五湖 in Japanese) is the name of the area and five lakes located at the base of Mount Fuji in the Yamanashi prefecture of Japan, about 90 minutes by train from central Tokyo. Approximately 1,000 meters above sea level, the lakes were formed by previous eruptions of Mount Fuji

The advantages of having the Olympic 10K Marathon Swim in the lakes of Mt. Fuji – compared to Odaiba – are numerous:

* beautifully clean, clear and cool water (around 20°C water)
* beautiful landmark visible to all
* ease of transportation from Tokyo and Olympic Village
* plenty of accommodations
* showcase one of Japan’s most famous landmarks
* use of English in area
* the flat water, rectangular course of Odaiba would be the same as the flat water, rectangular course in the Five Lakes of Mount Fuji

* The five lakes include Lake Kawaguchi [shown above], Lake Motosu, Lake Sai, Lake Shoji, and Lake Yamanaka. We have swum in them all and they are all remarkable venues.