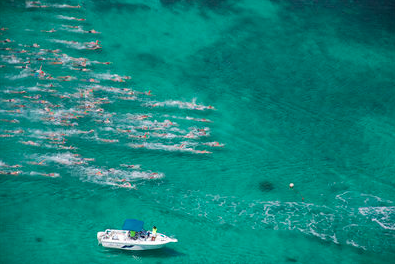 With the water temperature expected to be as high as the lower 30s°C under blistering warm air temperatures and high humidity levels during the 2020 Tokyo Olympic Games marathon swim in Odaiba Marine Park, far forward thinking national team coaches around the world are making plans to prepare their athletes for swimming fast for 10,000 meters in exceedingly warm conditions.

“For example, Swimming Canada made a very clever, very doable, very logistically reasonable decision on how it will select its national open water swimming team aimed at qualifying for the Tokyo 2020 Olympic Games,” opined Steven Munatones. “Other national teams are training in similarly warm-water, warm-air venues in preparation for the Olympic qualifiers and 2020 Games in Tokyo’s Odaiba Marine Park.”

“Since only the fastest swimmers who are comfortable in swimming fast for 10,000 meters in calm, very warm water and high air temperatures and high humidity will have hopes in qualifying for the Olympics as a Top 10 finisher or any possibility of finishing in a podium position at the Olympics, racing in warm water under high humidity and air temperatures makes complete sense.

Since these conditions do not exist in Canada – at least to the extent of the Olympic qualifying race or at the Olympics, partnering with the Flowers Sea Swim in the Cayman Islands shows far-sighted acumen on the part of Swimming Canada
.”

Swimming Canada announced that it will host its own Canadian Open Water Swimming Trials to select its national open water team for the first time in the Cayman Islands on April 27the 2019 at Governors Beach on Grand Cayman, the same location as the renowned Flowers Sea Swim.

In the past, Canada has selected its open water teams based on performances at another country or organization’s event, typically later in the year and often in the United States. These Trials will be a new Swimming Canada-sanctioned event that is held three weeks after the Canadian Swimming Trials to select the pool team.

“We wanted to hold a Trials at an earlier time so that coaches and athletes have the time to be able to prepare properly and obviously we can’t do that in Canada because of the water temperature,” explained Mark Perry, Swimming Canada’s Distance/Open Water Coach.

The Trials will select the swimmers to represent Canada at the FINA World Championships set for July in Gwangju, Korea, which represents a qualifying opportunity for the Tokyo 2020 Olympic Games and the inaugural World Beach Games. Swimming Canada will also select teams for the Pan American Games and FISU Universiade based on the Trials performances.

“I’m really excited that we’re having the chance to run our own Open Water Trials,” Perry said. “We’re in the position where we’ve got enough athletes that are interested in competing in the event and that want to race to get on teams. It’s going to be a great event hopefully.”

“It’s great we can partner with the Cayman Islands Aquatic Sports Association to deliver our Open Water Trials,” added Swimming Canada High Performance Director John Atkinson. “It will provide our athletes a great opportunity to race onto our teams.”

For more information on the Trials, visit here.