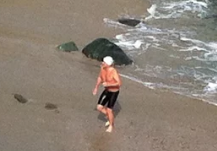 Tom Fristoe, a retired marathon swimmer, has always been a hard worker whether it was in the classroom at Long Beach State University, in the swimming pool at a 400 IM’er and distance freestyler, in the open water as a marathon swimmer, or in Silicon Valley as a successful entrepreneur.

“However hard we thought we were working, Tom has simply at another level – always.

He never let up…ever. And, what was even more remarkable, is that he is always smiling
,” said former teammate Steven Munatones. “Whatever [Olympic] coach Jon Urbanchek gave Tom to do in the pool, Tom went after it. He pushed himself to the extreme because he never wanted to leave anything left behind, either in the pool or in open water.”

That constant, passionate drive in the water is the engine that has helped Fristoe become successful on dryland.

Swimming World Magazine CEO Brent Rutemiller – rightly so – named Fristoe as one of the 10 most impactful people in the swimming community (see here). “Our sport is blessed with great people [including Fristoe]. Some are public figures, others work behind the scenes.”

“While Fristoe is a well-known public figure in the American swimming community, no one was arguably more behind the scenes than Tom after he led a team of programmers to create TeamUnify that revolutionized swimming and soon became the world’s largest online swimming club management system,” continued Munatones. “No one has a database on the swimming community like TeamUnify. Tom had a vision to make swimming more efficient with a greater utilization of technology. He more than realized that vision as TeamUnify became a dominant force among swim teams and events at all levels.”

His dream team at TeamUnify was recently acquired by SportsEngine and is now a part of NBC Sports Group. TeamUnify announced that its entire team will join SportsEngine to grow and support its 4,000 swimming organization customers and its nearly 1,000,000 active members.

“TeamUnify is hands down the best-in-class technology available to swimming organizations, and is the perfect fit to lead our expansion into the sport,” said Justin Kaufenberg, co-founder and CEO at SportsEngine. “We are looking to add companies to SportsEngine that have a rich history of providing whole product solutions to a sport vertical,and TeamUnify is the gold standard in swimming. We couldn’t be more excited to have their entire team join SportsEngine.”

TeamUnify now joins more than 500,000 teams, clubs, leagues, and associations around the world powered by SportsEngine.

“This is the perfect time for TeamUnify to join forces with SportsEngine to tap into their resources and further accelerate our growth,” said Fristoe. “Our singular focus on swimming has delivered unrivaled technical and operational improvements for swim teams to run their business better. With SportsEngine, we’ll be able to continue that focus and benefit from deeper integration with their platform.”