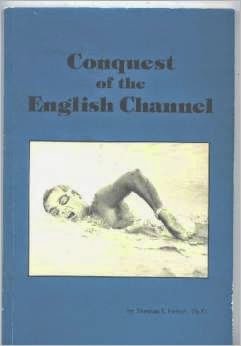 Tom Hetzel Ph.D. passed away in October 2011 in Texas, but his legacy lives on.

Joshua Ruiz said of him, “He was an astonishingly humble man and a true American legend. He has left behind God’s heavenly bodies of water in exchange for his wings in the sky.”

Hetzel had an incredible streak from 1967-1977 when he successfully completed 8 crossings of the English Channel in 10 years.

Hetzel was later inducted in the International Marathon Swimming Hall of Fame in 1980 and wrote a book in 1985 called Conquest of the English Channel. One of his many memorable lines was, “Throw away the stop watch and use the calendar.” While the swimmers he coached still marked their time by hours, his mindset was ideal for swimming from shore to shore.

In addition to coaching the world’s most famous swimming coach, Doc Counsilman, across the English Channel, Hetzel also co-founded with Drury Gallagher the Manhattan Island Swimming Association, the governing body that came before the NYC Swim.

He not only helped kick-off swimming in the waters around New York City, but he also enjoyed another prolific period between 1980-1984 when he completed eight swims around Manhattan Island. He estimated that he trained enough miles in the open water to circle the earth.

Hetzel took to marathon swimming “to test myself“, believing and proving that there is value in resisting quitting. Among his other personal beliefs and coaching gems were, “One more chance, can lead to success” and “Never allow negative words to creep into your vocabulary. Maintain a positive attitude and a positive vocabulary.”

For customer reviews of Conquest of the English Channel, visit Amazon.