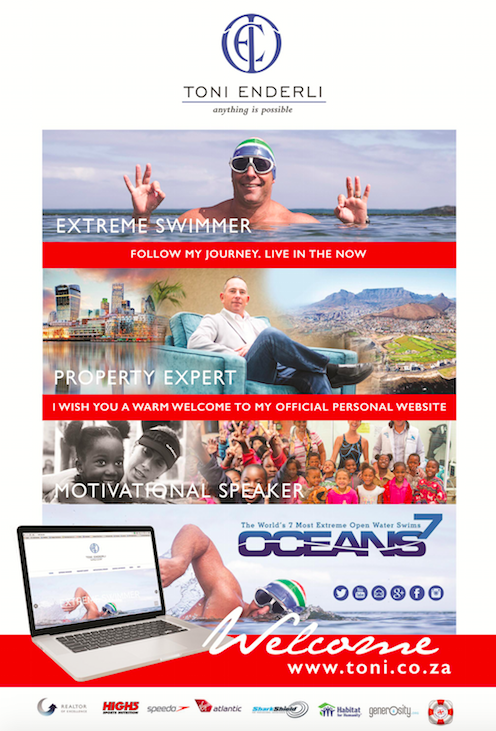 Toni Enderli is a typically tough South African open water swimmer, ice swimmer, and channel swimmer. Similar to many of his South African colleagues, he is entrepreneurial, versatile, and adventurous.

But training for his greatest global journey is currently underway, going after the Oceans Seven.

“I began open water swimming in 2009. The freedom, connection with nature and pure challenge associated with it had me right from the start – I was hooked. It has become the catalyst for the rest of the challenges I face, the drive I developed for swimming seeped into all the other areas of my life – career, family and personal goals. The way in which I began to face these aspects was the way in which I had learned to face my swimming challenges – with passion, unwavering determination and maximum positivity.

Open water swimming has taught me that it does not matter how old or young or you are, nothing is impossible and whatever you put your mind to, you can achieve – if you want it badly enough.

It does not matter about the position or situation you are within your life – as long as you never give up and carry on moving forward, you will eventually get through it – like any strong current. You have to push your own boundaries in order to grow and learn. To do that, you need to keep asking questions and strive to grow on a daily basis. If you stay within your comfort zone you will never grow or experience life at its fullest. Open water swimming has taught me to live & embrace the ‘moment’, to be thankful and humble for what I have. Open Water swimming has led me to find ‘MY WHY’