Too Cool, Technology In Tokyo 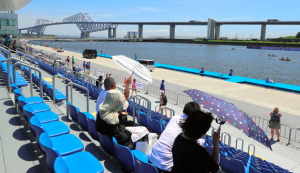 Too Cool, Technology In Tokyo

With the anticipated heat at the 2020 Tokyo Olympics, the Japanese are exploring different kinds of technological alternatives.

The 2020 Tokyo Olympic and Paralympic Organizing Committee will consider using snow machines as a countermeasure against the heat during September 13th during the Olympic canoe test event to be held at the Uminomori Water Stadium in Tokyo. Artificially made snow will fall on the exposed spectator seats to enable a cooling effect.

The same cooling methods have been used at outdoor music events in Japan.

“The Japanese organizers are trying everything possible, that is for sure,” observed Steven Munatones. “The Olympic marathon swimmers have to hope for no rain leading up to the 10 km marathon swim in order to avoid the urban runoff and hope for cloud cover on race day as well as lower-than-normal air temperatures, combined with a nice ocean breeze in order to avoid the 31.5°C that were reported in Odaiba Marine Park in July.”