Top Americans To Face Keri-Anne Payne At The Midmar Mile 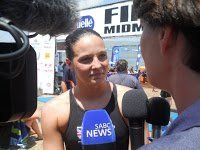 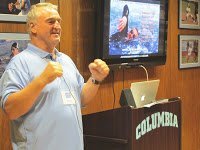 Keri-Anne, the odds-on Olympic 10K Marathon Swim gold medal favorite has dominated the aQuellé Midmar Mile in recent years. The quick mile swim in the world’s largest open water swimming extravaganza will be a fantastic early season competition that will undoubtedly see the trio swim stroke-for-stroke for much of the race.

While Christine has been on the world scene for a few years with two FINA World Cup victories, Ashley is an emerging force in the elite echelon of open water swimming. Her breakout performance was at the 2011 FINA World Swimming Championships where she earned a gold medal in the 5K Team Pursuit event and a bronze medal in the solo 5K race in a photo finish. Earlier this year, Ashley was named the 2011 USA Swimming Female Open Water Swimmer of the Year.

Their coach Bill Rose of the Mission Viejo Nadadores will be accompanying his swimmers and is one of America’s most highly recognized coaches. He has coached several USA Swimming national teams at international competitions, including at the 2008 Beijing Olympics, the 2007 and 2009 FINA World Swimming Championships, the 1995 Pan American Games, the 2003 Pan American Games, the 1997, 1999 and 2006 World University Games and the 2008 FINA World Open Water Swimming Championships. He has also coached several international athletes to the Olympics, including the 2000 Sydney Olympics and was inducted in the American Swim Coaches Hall of Fame in 2004.

The women will be joined by another leading marathon swimming personality. Martin Strel, as a guest of Wayne Riddin, the long-time race director of the aQuellé Midmar Mile. The legendary Slovenian long-distance swimmer is known as the Big River Man for completing stage swims in the entire length of the Danube River in Europe, the Mississippi River in the USA, the Yangtze River in China and the Amazon River in South America.

While speed is the name of the game for Keri-Anne, Christine and Ashley, stamina is Martin’s middle name. Not only has he swum non-stop for days in a row (84 straight hours on his longest 504.5K non-stop swim in the Danube River), but he also has the patience and logistical talents to put together stage swims of hundreds of kilometers around the world.

Come February 11-12th in Kwazulu Natal in South Africa, the stars will be out at the aQuellé Midmar Mile.