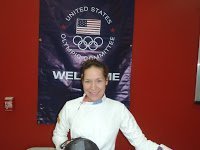 Rendy Lynn Opdycke completed the Triple Crown of Open Water Swimming in a shortest period than anyone else in the history of the marathon swimming.

After her Triple Crown achievement, she earned a masters degree in education and learned to shoot, fence and ride horses in her new goal to become a world-class pentathlete. Rendy is currently competing for USA Pentathlon and training in Colorado Springs at the USA Olympic Training Center. Slimmed down and confident in her new land skills, the former marathon swimmer is looking good for a possible shot at representing the USA in the 2016 Rio Olympics.

“She has really improved and is quite an athlete,” remarked Genadijus Sokolovas of USA Pentathlon where athletes compete in épée fencing, shooting, 200m freestyle, equestrian show jumping and cross country running.

“I lost over 30 lbs from my days of marathon swimming and had to learn a lot of new skills, but it is fun and love the sport and training here at the Olympic Training Center.”