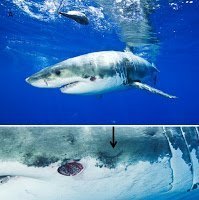 A cookiecutter shark took a bite out of Hawaiian channel swimmer Michael Spalding when he was swimming from the Big Island of Hawaii to Maui. In the middle of the night, Spalding was initially hit in the sternum and then rolled over on this back.

The next moment, the deep-water cookiecutter shark came up again and took a round mound of flesh from his meaty calf – the most recent incident of a channel swimmer being attacked by a shark.

But Spalding is not the only prey of the smallish and highly unique cookiecutter.

Divers in Guadalupe Island about 240 kilometers west of Mexico’s Baja California found evidence that cookiecutter sharks also take round bite-size chunks from great white sharks. The photograph and evidence was documented in a study published recently in the journal Pacific Science. For more information, visit here.