Tough Triple Crossing – Roughing It Across The Rotto 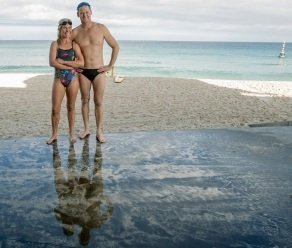 Swimming from Point A to Point B is a natural inclination in the open water. People often swim to an offshore buoy, to the end of a pier, from pier to pier, or across a lake or channel. “I made it,” “I did it,” are the concrete goals that many want to feel. It is a feeling of accomplishment and deep satisfaction.

Swimming from Point A to Point B and back again to the start is also a natural inclination in the open water. People see a goal and want to go from here to there and back. Over there and back again are the goals that many feel a deep urge to attempt and complete. The two-way (double-crossing) leads to a most profound feeling of accomplishment and satisfaction.

But a three-way or triple-crossing is something beyond the single or double crossing. There is something special that drives swimmers to go there and back and then once more. It is usually a need to go further than ever possible. 32-year-old Ceinwen Roberts and 42-year-old Rohan Hollick have that feeling. They need to do a three-way. A triple crossing is in their sights. They are planning on swimming between the western coast of Australia and Rottnest Island an unprecedented three times non-stop this week. Roberts and Hollick call their attempt the Swimming To Freedom For Walk Free. Their 59.1 km swim is meant to raise awareness of the Walk Free movement against modern slavery.

With an English Channel swim in her resume and two double Rottnest crossings in his, the pair feel they can step it up. Their plans are to swim 3 even-split crossings of 6 hours each for an 18-hour goal. “It is a crazy thing to do, I understand that, but you only live once – so why not do crazy things,” Roberts said to The West Australia.

Photo of Ceinwen Roberts and Rohan Hollick by Steve Ferrier of The West Australian.