Training For The English Channel 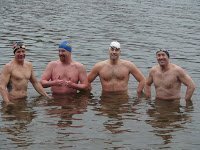 People all over the world are currently training for major channel swims and other long-distance swims all over the world. The English Channel, the Catalina Channel, the Cook Strait, Gibraltar Strait and Tsugaru Channel – and several dozens of other swims from western Australia’s 19K Rottnest Channel Swim to the 24-mile Tampa Bay Marathon Swim in Florida.

David Cameron, head coach of the Minneapolis YWCA and Minnesota Tri Masters in the United States, is one such coach who helps swimmers realize their dreams.

Q1. Daily News: Was it initially difficult for the athletes to enter Southern California’s 58°F water after months of training solely in 80°F pool water?

A1. David: Bryan did his qualifying 6-hour swim and Shannon, Todd and Tom did a 2-hour qualifier for their English Channel relay. Shannon, Todd and Tom had previous cold-water experience. One had transitioned to cold swimming without a wetsuit over time. I’m very proud of their performances.

Last summer, Bryan did his first open water training. He has plenty of endurance; he did a 12-hour pool swim in December to go beyond his expected Channel time. The cold was a challenge, but the only time he was frustrated was when the beach guards paddled up and did a longer-than-expected checkup. Stopping to talk in that temperature for too long takes a lot to overcome.

Q2. Daily News: Was it difficult at any time for the athletes to continue swimming for 6 hours in rough water after months of training solely in an indoor pool?

A2. David: The relay swimmers got in the common pattern of looking for me to signal the next check-up. I know when swimmers are looking for a break because they look at me way more often than is neccessary. Bryan kept right on schedule with his feeds and only asked once how long he’d been in, so I know he’s in the right mindset for a longer event.

A3. David: The lifeguards in the tower were gracious enough to let us in for hot showers and foot-soaking. That evening, the only symptom we saw was hunger. Bryan was a bit sore the next day, and everyone was pleased with the morning off (they met at the hotel hot tub instead), but everyone was in good spirits.

A4. David: The relay swimmers are able to take on distances like that without pain because of changes to their strokes over time. Bryan’s college coaches at St. Olaf helped him develop a very smooth front-quadrant freestyle.

Q5. Daily News: Did they change their normal pool swimming tempo while swimming in the ocean for the first time in the cold water?

A5. David: Old habits snuck in faster when they were focused on cold water. I saw the best strokes after the first 30 minutes.

Q6. Daily News: How did the athletes feed during their swims?

A6. David: Bryan was on 5-20 second feeds about every 25-35 minutes with liquid and gels. The swimmers made their own mixes.

Q7. Daily News: Did the swimmers swim together?

A7. David: The relay swimmers went on their own for an hour and then stuck together as the seas got rough. If the swimmers slipped in too close to shore, they knew it on the first wave.