Training In A Ditch To Go To The Olympics 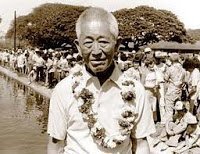 Three Year Swim Club is a play by Lee Tonouchi is playing now until March 11th at the David Henry Hwang Theatre at the Union Center for the Arts in Little Tokyo in downtown Los Angeles, California.

The swim-centric play is directed and choreographed by Keo Woolford, in association with the Honolulu Theatre for Youth, and was inspired by the true life story of Soichi Sakamoto who trained the youth of Maui to swim in the plantation irrigation ditches on their path to becoming Olympic champions. Set on the island of Maui in the 1930s, this heartwarming play becomes transcendent as the art of hula becomes the metaphor for competitive swimming.

The East West Players production is sponsored in part by a grant fund from the National Endowment for the Arts with .

Lee tells Coach Sakamoto‘s story who founded the Three Year Swim Club with three years until the next Olympics. “It takes place in Maui, 1937. The goal was to make Maui plantation kids go to the Olympics in 1940, so that’s why he called it Three Year Swim Club. [He] did never have one pool to train them in. So, he was gonna make them swim in the plantation irrigation ditches for their training.”